The ARX-014S Silver Bullet Suppressor is a remodeled version of a ARX-014 Silver Bullet stored in the Magallanica.[1][2] The main reason for the remodeling was to enable it to use the RX-0 series' Beam Magnum.[1] To accomplish this, its right arm is modified to be exchangeable, its backpack is changed to one that stores four replacement arms and an arm exchange system consisting of a crane and rail is installed on the rear waist armor.[1][2] These measures allow the exchange of the right arm after each shot of the Beam Magnum, countering the malfunctions that occured to the arm due to use of the weapon.[1][2]

Other notable modifications include its face being greatly different, the number of antennas are increased to a total of six, modified knees and new feet.[1][2] All of the modifications are possible due to the high extensibility of the original Silver Bullet.[1] The colors of the mobile suit have also been changed to a black color scheme.[1][2] Besides the Beam Magnum, the Silver Bullet Suppressor's other armaments consisted of 60mm Vulcan Guns, Beam Sabers, Grenade Launchers and Beam Cannons.[2] The "Suppressor" in its name is said to signify that "the mobile suit is to deter and restrain hostile organizations".[1]

A beam weapon designated to the RX-0 series.[2] It utilizes an E-pac system with five connected E-pacs, consuming one E-pac per shot.[2] Its power is comparable to that of a Hyper Bazooka Launcher, but its recoil is also large, causing malfunctions in the arms when used by other mobile suits outside of the RX-0 series.[2] To counter this problem, the Silver Bullet Suppressor has a system where its right arm is exchanged after each shot.[1][2]

Beam Saber is the standard close combat weaponry of many mobile suits. Powered by a rechargeable energy capacitor, it emits high-energy Minovsky particles to form a blade-shaped I-field (via manipulation of electromagnetic fields), and fills this I-field shell with superheated Minovsky particle plasma to produce an effective cutting blade. The Silver Bullet Suppressor has two beam sabers stored in the hip armor.

A pair of beam cannons are mounted in the backpack binders. Each cannon has a power rating of 4.2 MW.

The Quasi-psycommu system was developed to allow the use of remote weaponry by non-Newtypes. This system actively scans the pilot's brainwaves and then translate the thoughts into commands for the remote weapons. Using the quasi-psycommu, even non-Newtypes can control simple wire-guided remote weapons, such as INCOMs. INCOMs, unlike funnels or bits, still have to be tethered to their control unit by wires because the electrical signals to the INCOM would otherwise be disrupted by Minovsky Particles.

The Silver Bullet Suppressor was piloted by Banagher after the RX-0 Unicorn Gundam was sealed. In U.C.0097, it intervened in the combat that took place at the Helium-3 storage base, saving the RX-9/C Narrative Gundam C-Packs' Core Fighter from being destroyed by the NZ-999 II Neo Zeong. This single action of Silver Bullet Suppressor triggered a change in the course of the battle. 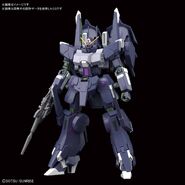 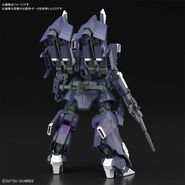 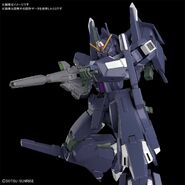 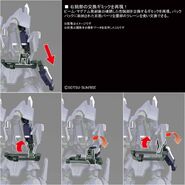 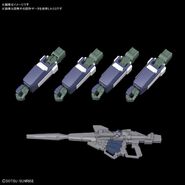 Retrieved from "https://gundam.fandom.com/wiki/ARX-014S_Silver_Bullet_Suppressor?oldid=459415"
Community content is available under CC-BY-SA unless otherwise noted.