The AMX-117LG Gaz-L Grau is a mobile suit from Mobile Suit Moon Gundam. It is piloted by Klaus Bakkel of the Neo Zeon's elite Royal Guard Galbaldy unit.

Developed from the AMX-117L Gaz-L after the first Neo Zeon War, the Gaz-L Grau is an enhanced space-use mobile suit designated to protected the first leader of Neo Zeon alongside its twin unit, the AMX-117RG Gaz-R Grau and they are stationed at the Neo Zeon base in Atalant 3. The Gaz-L Grau features a new silver and gray color scheme and its distinctive large flared armor on its left shoulder is replaced by a 6-tube special missile pod. Its right shoulder is also equipped with a shield to enhance protection. The backpack-mounted hyper beam sabers of Gaz-L are replaced by the regular beam sabers. Like the Gaz-L, the Gaz-L Grau is also equipped with beam rifle and heat lance for versatile ranged and close-quarter attacks.

For Gaz-L Grau, the large flared left shoulder armor of Gaz-L is replaced by a 6-tube special missile pod, which was installed with a mono-eye sensor for better target tracking. The missile warheads are IC-controlled to facilitate time-difference attack.

As its name implies, the heat lance uses thermal energy to heat up a metal blade to super-high temperatures, similar to the heat weapons used by the Principality of Zeon. The high heat allows the lance to begin melting the enemies armor on contact, which when combined with the force applied to the attack, can inflict significant damage.

The main long-range armament of the Gaz-L Grau. The particle beam fired from a beam rifle can penetrate almost any armor that has not been treated with specific counter-measures. The Gaz-L Grau's Beam Rifle is similar to the one used by Gaz-L and is powered by a rechargeable energy cap.

The Gaz-L Grau has a shield equipped on its right shoulder which serves as a protective device as well as weapon rack. Its design is similar to the one used by RMS-117 Galbaldy β. 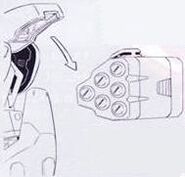 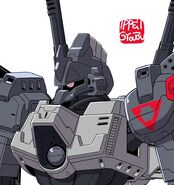