The AMX-114 Demeter is a mobile suit from Mobile Suit Gundam Walpurgis.

Although the AMX-114 Demeter's head shape and appearance resemble that of the AMX-004 Qubeley, its body is more slender and feminine [1]. It is equipped with three back-mounted boosters that also function as funnel pods instead of the Qubeley's characteristic shoulder armor[1].

A beam firearm with a direct connection to the generator, built into the cuffs of the left and right wrists. By detaching the barrel and holding it with the manipulator, it becomes a beam saber for close combat.

An all-range attack terminal controlled by the psycommu system. Each funnel pod is equipped with 10 funnels, for a total of 30. The funnels have the ability to generate beam sabers when connected to the pod tips.

The AMX-114 Demeter is a mobile suit belonging to the surviving Neo Zeon fleet that attacked the Side 2 colony Olympus. It is piloted by a woman who calls herself Haman Karn who had died in battle six months prior.

AMX- 114 Demeter Front and Back 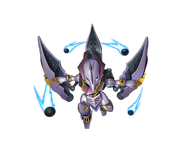 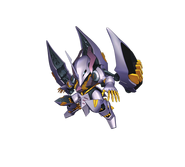