The AMX-109 Kapool Corin Nander Custom is a mobile suit that appears in the Turn A Gundam anime series.

Used by Corin Nander to assist the Militia and Dianna Counter forces in their battle against the invading forces of Gym Ghingham. The technicians aboard the Soleil, hastily modified a AMX-109 Kapool, for Corin's personal use. Aside from the color change and antenna on the head, the unit was also retrofitted with a modified JMA-0530 Walking Dome hand over its right forearm allowing the use of hand-carried armaments. Besides these changes the unit still retained all of the Kapool's standard armaments and performance.

A beam cannon located in the position of the mono-eye, thus nicknamed "beam eye". It has a relatively low power output, but its high enough to destroy the MS main camera; so, when it fires, the sensor would be covered by a protective filter.

The Sonic Blast could be considered a kind of mega particle cannon. Because of the seawater stored in the Kapool's double-layered armor being used in its cooling system and with the Kapool having enough generator output to drive high-output beam weapons even on land, this resulted in the Sonic Blast being a formidable weapon.

These melee weapons consist of 3 large claws per hand, plus 2 small claws on the palm. Internally there is a movable frame structure, which allows enough strength to cut off an enemy mobile suit's armor plates. Outside of battle these claws would serve as good digging tools, at the Militia's excavation sites.

Created by the Militia, it is a triple-barreled projectile weapon mounted on the left forearm. It has a low ammo capacity.

Mounted on the right forearm. This equipment allowed the Kapool to use hand-carried armaments such as the Minchi Drill. The suit could also launch the hand as a 'Rocket Punch'-style attack.

The Minchi Drill is a unique mace-like close combat weapon that is first seen used on the TAF-M9 Eagail. It is based on a shield machine (tunnel boring machine) used for excavations. This weapon can pulverize or even cut through mobile suits.

When Corin Nander decided to join the Diana Counter to combat the Ghingham Fleet's invasion of Earth, he was given a customized Kapool, and used it in combat against the invaders.

During the last battle between the Turn X and Turn A, Corin charged at the two Turn units with his Kapool when they were locked in a beam saber clash. Disabling Merrybell's Bandit, he then attempted to break up the stalemate with the Rocket Punch Glove, only for the Turn X to retaliate with the Moonlight Butterfly, critically damaging the suit before it explodes, taking Corin's life with it.

Corin's Kapool (left) as seen in the ∀ Gundam anime 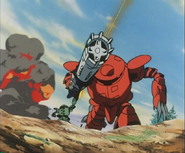 Charging at the Turn X and Turn A 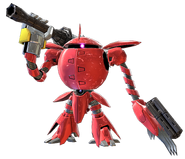 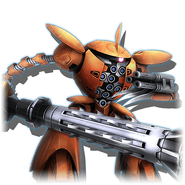 As seen in the game Gundam Diorama Front 3rd. 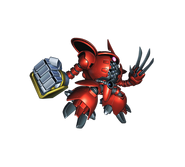 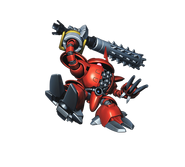 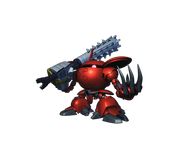 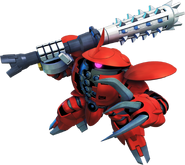 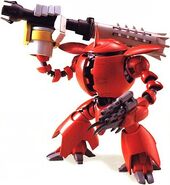 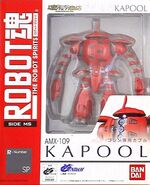