The AMX-109 Kapool (colloquially referred to as "Ball" by both sides) is a mobile suit from the Correct Century timeline.

The Kapool's appearance was identical to the AMX-109 Capule from the Dark History. However, its size was smaller, and it was capable of operating in space as well. Though it was designed for amphibious combat, and can transform into a cruise mode in water, the Militia was unaware of this, and mostly used it for ground combat. Its cockpit was fitted with a First Neo Zeon War era linear seat, but it did not have a panoramic monitor.

A beam cannon located in the position of the mono-eye, thus nicknamed "beam eye." It has a relatively low power output, but its high enough to destroy the MS main camera; so, when it fires, the sensor would be covered by a protective filter.

The Sonic Blast could be considered a kind of mega particle cannon. Because of the seawater stored in the Kapool's double-layered armor being used in its cooling system, and with the Kapool having enough generator output to drive high-output beam weapons even on land, this resulted in the Sonic Blast being a formidable weapon.

These melee weapons consist of three large claws per hand, plus two small claws on the palm. Internally, there is a movable frame-structure, which allows enough strength to cut off an enemy mobile suit's armor plates. Outside of battle, these claws would serve as good digging tools, at the Militia's excavation sites.

Created by the Militia, they are a pair of triple-barreled projectile weapons mounted on the forearms. They have a low ammo capacity.

A long range firearm made by the Militia to assault enemies from afar. There are fixed and a mobile types. For convenience of transport the cannon could be mounted on a flatbed trailer and towed by either a truck or MS. When used by the Kapool, the televisions attached to the anti-aircraft cannon are projected onto Kapool's monitor to fine-tune the aiming.

A weapon borrowed from the SYSTEM ∀-99 ∀ Gundam, it is essentially a large spiked ball attached to a chain. It was used to give the MS using it a ranged melee weapon. The MS could either throw or swing the Hammer around itself in order to impact and damage its target through the sheer mass of the hammer. Because the Kapool lacked normal manipulator hands, the Hammer's chain would have to be tied to the arm for use.

As the war with the Moonrace begins in CC 2345 on Earth's North Ameria continent, Inglessa ruler Guin Sard Lineford directs miner Sid Munzer to search the Mountain Cycle region for mobile suits. His search yields the AMX-109 Kapool, which becomes the first mobile suit used in mass numbers by the Inglessa Militia. Though the Kapool's ammunition is no match for advanced Moonrace mobile suits like the JMA-0530 WaDom, it is extremely effective against smaller mobile suits like the MRC-U11D WaD. Later, as the spaceship Willgem travels across the ocean in its journey to the Moon, pilot Sochie Heim discovers that the Kapool is actually designed for underwater combat.

Disguised as a hut

Kapool as seen on Turn A Gundam (Manga) 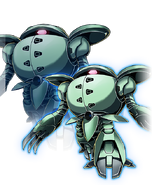 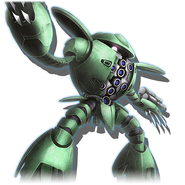