The AMX-109 Capule is a descendant of the amphibious MSM-03C Hygogg used during the One Year War. Its spherical body exhibits high water resistance and excellent mobility in water. The limbs are housed within the body during underwater travel. Its arm units are similar to the Hygogg and are armed with Iron Nails, which have become a standard weapon for amphibious Zeon MS. Although its specifications surpass previous amphibious MS, Neo Zeon forces on Earth lacked confidence in the Capule and instead preferred the Federation-made RMS-192M Zaku Mariner.

A beam cannon located in the position of the mono-eye, thus nicknamed "beam eye". It has a relatively low power output, but its high enough to destroy the MS main camera; so, when it fires, the sensor would be covered by a protective filter.

The Sonic Blast could be considered a kind of mega particle cannon. Because of the seawater stored in the Capule's double-layered armor being used in its cooling system and with the Capule having enough generator output to drive high-output beam weapons even on land, this resulted in the Sonic Blast being a formidable weapon.

These melee weapons consist of 3 large claws per hand, plus 2 small claws on the palm. Internally there is a movable frame structure, which allows enough strength to cut off even Gundarium armor plates.

The Capule was introduced during the First Neo Zeon War, where it was entrusted to a local fisherman named Taman by Neo Zeon forces sent to attack the Nahel Argama. One silver-painted Capule belonged to Neo Zeon officer Phaeton Rahu Argis. During U.C. 0096, several Capules were deployed by the Zeon remnants in their attacks on Federation. One was seen during the Zeon attack of Dakar, but was destroyed by a MSA-003 Nemo. Another two Capules were used to attack the Federation's Torrington Base. Both of these units would later be destroyed by the RX-160S Byarlant Custom. 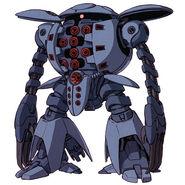 A Capule at Dakar, beside a downed GM II 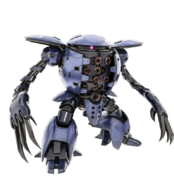