The AMX-107 Bawoo is a transformable mobile suit developed by Neo Zeon during the First Neo Zeon War. It was introduced in the anime Mobile Suit Gundam ZZ.

Created by Neo Zeon based on the 'Project Zeta' series of MS, it is capable of transforming and separating into the Bawoo Attacker (upper torso) and autonomous Bawoo Nutter (lower torso) units. On Glemy Toto's orange-colored prototype, the left thigh armor is decorated with the archaic kanji 𪚢, which combines the characters for dragon (龍, dragon?) and flight (飛, flight?) and is pronounced "bau" (bawoo) in Japanese. Glemy highly praised the Bawoo Attacker's fluid, effortless mobility, and its potential as an escape unit. The standard armaments of the Bawoo consisted of grenade launchers, beam sabers, beam rifle, and shield with five mega particle cannons. When required, it can also carry three missiles on each flexible wing binders.

In U.C. 0096, the Neo Zeon remnants, 'The Sleeves', deployed modified Bawoo units. Besides a new color scheme and the group's distinctive markings on its arms and chest, the suit also gained a pair of vulcan guns on its torso, a pair of machine cannons in its side skirt armor and uses a beam machine gun as well as a shield without the mega particle cannons. The Bawoo Nutter was reconfigured to have its own cockpit, granting better coordination with the Bawoo Attacker, and allowed the Nutter to continue operating if the Attacker was destroyed. The Nutter could also carry six missiles, bringing the total amount of missiles to twelve.

Close combat weapon that emits a beam blade when used. A pair of 'knight type' beam sabers are stored on Bawoo's forearms, and are automatically placed in its hands when deployed.

A 4-tube grenade launcher is mounted on each forearm. Generally used for intimidation or diversionary tactics, a pilot with good aim can use the grenades to destroy specific targets, disable weapons and deal damage in various ways.

On The Sleeves' Bawoo, a pair of Vulcan guns are mounted on top of the torso.

Present only on The Sleeves' Bawoo, the pair of machine cannons are mounted in the top of the side skirt armor.

A standard hand carried ranged beam weapon, it is powered by a rechargeable energy cap. Capable of firing concentrated mega particles, attacks from a beam rifle can damage any ordinary armor that has not been specially treated to resist it. Bawoo's beam rifle is easy to wield, and enhances the suit's aerodynamics during its transformation. It has a rapid-fire mode and is also known as a 'Beam Assault Rifle'. The same model is also used by AMX-102 Zssa and AMX-009 Dreissen.

Used by The Sleeves' Bawoo, this handheld beam weapon was originally used by the AMS-119 Geara Doga, and is powered by a replaceable e-pac.

Bawoo's shield serves as a defensive as well as an offensive device, with a set of 5 mega particle cannons powered by build-in generator. When the Bawoo separates into the Bawoo Attacker and Bawoo Nutter, the shield is attached to the underside of the Bawoo Attacker to enhance its aerodynamics. The Sleeves' Bawoo used a slightly different shield which removed the mega particle cannons for better defensive capabilities.

The Bawoo can be equipped with a pair of external propellant tanks to extend its operating time. They can also be launched as projectiles.

The transformed form of the suit's torso, arms, head, backpack and its weaponry is dubbed the "Bawoo Attacker". The transformation process involves unfolding the nose unit of the Attacker, tilting the head forward, rotating the arms to the bottom of the fuselage, extending the flexible wing binders and the lifting the backpack unit. Boasting exceptional mobility, it also has high offensive power as it is armed with the beam rifle, missiles, etc. With the shield attached to the underside of the fuselage, its aerodynamics is improved. The Bawoo Attacker modified by the Sleeves had an additional pair of vulcan guns.

The transformed form of the suit's lower body is called the "Bawoo Nutter". The Bawoo Nutter is controlled wirelessly by Minvosky transmission, allowing it to function as an independent combat drone, and can also fly on its own to a certain degree during communication failure. It forms a lifting body by deploying part of the side skirt armor into a canard arrangement, and rotating its legs 90 degrees. The Bawoo Nutter can be used as a giant missile with a maximum payload of 1,800 kg and an effective range of 640km, which is greater than most beam cannons. Beside normal explosive, it can also be loaded with nuclear warheads. The Bawoo Nutter modified by the Sleeves had its own cockpit, additional machine cannons and can mount six missiles.

Meanwhile, thanks to political stratagems, many machines and technologies were obtained from the Federation Forces and the Titans. In particular, it is said that a considerable number of staff who "participated in" or "returned to" Neo Zeon came from Anaheim Electronics and the AEUG, where many elements approved of Axis's return to the Earth Sphere and the revival of Zeon. In fact, the Bawoo itself could even be called a dead copy (based on stolen designs and technology) of the MSZ-006 Zeta Gundam, or possibly another machine from the Zeta Project, that was created as a result of these kinds of situations.

Initially, the Bawoo's plan called for a pilot each for the Bawoo Attacker and Bawoo Nutter, but this was judged poorly in terms of pilot efficiency and was later replaced by the Bawoo Nutter being remote controlled. However, the remote control was later dropped as it was found to be difficult for the pilot to use. Due to the Bawoo's excellent specifications, its deployment was changed to a limited production model for high-ranking officers and aces, with the transformation and docking mechanism scrapped.

A prototype Bawoo was tested by Glemy Toto, who provided feedbacks on the potential of the separated forms. Based on these feedbacks, the developers revived the transformation and docking mechanism, and the Bawoo Nutter was made capable of functioning as a giant missile. The higher brass subsequently gave permission for the suit's mass production. The mass production version of the Bawoo has a green color scheme. During Glemy's rebellion, some units were used by his faction and were painted in a gray color scheme.

In U.C. 0096, a number of these mobile suits survived and were used by "The Sleeves" during the third major Neo-Zeon Movements. These mobile suits were modified with new weaponry, repainted into a new color scheme and given the distinctive markings featured on many of the mobile suits used by the group. One such unit was seen battling the Nahel Argama's mobile suits at Industrial 7, where it destroyed a RGZ-95C ReZEL Commander Type. Shortly after, it launched a solo offensive, charging towards the Nahel Argama, but was destroyed by the combined attacks from the ship's guns and defending mobile suits. 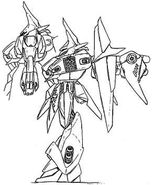 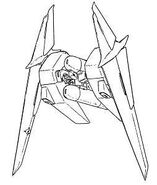 Attacking with a Beam Saber while on a Base Jabber

As seen on Gundam Build Fighters 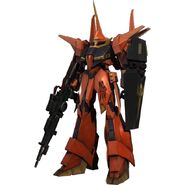 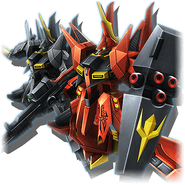 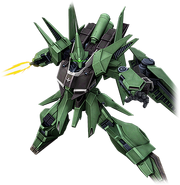 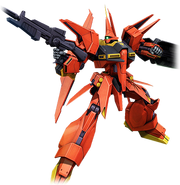 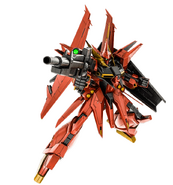 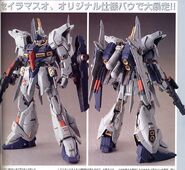 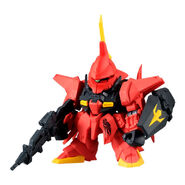 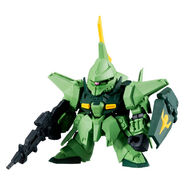