The AMX-107R Rebawoo is a AMX-107 Bawoo that has been modified and renovated by the Neo Zeon remnants "The Sleeves." By adopting Psycoframe in the nose portion of the lower torso (Rebawoo Nutter) and around the cockpit (Rebawoo Attacker), coordination during the Rebawoo's separation is now performed more smoothly. Moreover, the Psycoframe allows Newtype pilots to control the Rebawoo more easily.

Close combat weapon that emits a beam blade when used. A pair of beam sabers are stored on Rebawoo's forearms and are automatically placed in its hands when deployed.

A pair of beam vulcans are mounted on the inner side of the chest intakes.

A 4-tube grenade launcher is mounted on each forearm. Generally used for intimidation or diversionary tactics, a pilot with good aim can use the grenades to destroy specific targets, disable weapons and deal damage in various ways.

A pair of machine cannons are mounted in the top of the side skirt armor.

Attached to the side of of each leg is a flexible beam gun that position themselves for the Rebawoo Nutter to use.

The Rebawoo can carry three missiles on each flexible wing binders and also three on each side skirt armor, for a total of 12 missiles. The missiles can be used in Rebawoo Attacker mode and MS mode.

The Rebawoo uses the same beam rifle as used by the MSN-06S Sinanju. When the Rebawoo separates into the Rebawoo Attacker and Rebawoo Nutter, the beam rifle is attached to the underside of the Attacker.

The Rebawoo uses two beam axes used by the Sinanju and can store them similarly in its shield just like the Sinanju as well. By varying the output, the axes' beam blades can change shape, turning the weapon into beam sword-axes. When the pair of beam sword-axes are combined at the grip, they form a beam naginata. The beam axes can be used when stored on the shield as they are attached to movable mounts, allowing them to flip forward when required.

The Rebawoo can be equipped with a pair of external propellant tanks to extend its operating time.

The transformed form of the suit's torso, arms, head, backpack and some of its weaponry is dubbed the "Bawoo Attacker". The transformation process involves unfolding the nose unit of the Attacker, tilting the head forward, rotating the arms to the bottom of the fuselage, extending the flexible wing binders and the lifting the backpack unit. Boasting exceptional mobility, it also has high offensive power as it is armed with the beam rifle, beam vulcans, missiles, etc. With the shield attached to the underside of the fuselage, its aerodynamics is improved.

The transformed form of the suit's lower body is called the "Bawoo Nutter". Unlike the original Bawoo Nutter, the Rebawoo Nutter is primarily controlled through use of the psychoframe-equipped cockpit. It forms a lifting body by deploying part of the side skirt armor into a canard arrangement, and rotating its legs 90 degrees. Also unlike the original, the Rebawoo Nutter carried more offensive capabilities, with its machine cannons, flexible beam guns and missiles.

The Rebawoo features Psycoframe technology to perfect the separation mechanic of the original AMX-107 Bawoo. The Psycoframe increases the coordination of the Rebawoo's lower torso (Rebawoo Nutter) and cockpit (Rebawoo Attacker) during separation, and allows Newtype pilots to control the Rebawoo more easily.

The Rebawoo was originally intended to be piloted by Full Frontal, the leader of the Neo Zeon remnants "The Sleeves." However, the plan was dropped when the Sleeves acquired and modified the MSN-06S Sinanju Stein into the MSN-06S Sinanju as Full Frontal's personal machine. Due to this, Full Frontal never piloted the Rebawoo, and the "10S" stencils on its body, which was the callsign for Full Frontal's unit, were all crossed out. Instead, it was used by other Sleeves pilots and had seen battle several times.

One such battle occurred when the Rebawoo encountered the RX-0 Unicorn Gundam 02 Banshee and RX-0 Unicorn Gundam 03 Phenex while undergoing performances tests in a debris-filled shoal zone in December 3, U.C. 0095. It also appeared in the manga U.C. 0094: Across The Sky as one of the antagonist's main suit. 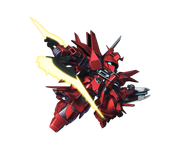 As featured in Mobile Suit Gundam U.C. 0094: Across the Sky