One of many mobile suits developed by Neo Zeon during the First Neo Zeon War, the AMX-104 R-Jarja was intended for use by high-ranking officers (also known as "Knights" in Neo Zeon). It was created by refurbishing an MS that inherited the design concept of the old Principality of Zeon's YMS-15 Gyan from the One Year War.

While the R-Jarja is most well known for having a red color scheme due to Chara Soon's unit, there were also other units with different color schemes such as the one piloted by Danton Hyleg, indicating that multiple R-Jarja was produced.

One of the R-Jarja's primary weapons, it is power rated at 0.72 MW and has a characteristic look thanks to its large handguard and unique beam generator. When not in use, it is stored in a scabbard-like sheath mounted on the waist that also serves as an energy charger.

A pair of missile pods built into each variable shield, and thanks to the articulated shoulders, the missile pods have a wide angle of fire. They are loaded with 12 AMS-05M missiles.

The beam rifle is a ranged beam weapon that fires condensed mega particles. Powered by a replaceable e-pac, it is power rated at 3.1 MW, but its output can be adjusted via the selectors on the sides of the rifle. A low output heat blade is mounted under the rifle's barrel, it is capable of slicing off part of MSZ-006 Zeta Gundam's shield and can be detached and used as a separate weapon. Additionally, the rifle also has a bipod for stable firing and can be stored on the right side of the waist or on a rack at the back of the shoulder when not in use.

A hand-carried beam weapon originally used by the AMS-119 Geara Doga, it is powered by a replaceable e-pac. Used in the manga version of Mobile Suit Gundam Twilight Axis.

The most well known unit was operated by ace pilot Chara Soon during the First Neo Zeon War in UC 0088. Chara Soon used her R-Jarja in multiple missions against the Anti Earth Union Group ship, the Argama, and her crew. She clashed multiple times against young AEUG pilot Judau Ashta, and on one occasion, she and her R-Jarja tagged team with Mashymre Cello and his AMX-103 Hamma Hamma and severely damaged Judau's MSZ-006 Zeta Gundam.

However, despite being an excellent pilot, Chara suffers from some mental instabilities when in a mobile suit. Because of this, she tends to want to "play" with her opponents which can give inexperienced pilots like Judau a chance, especially when he pilots the powerful MSZ-010 ΖΖ Gundam. Each time the Judau/ZZ Gundam battled against Chara/R-Jarja, the Neo Zeon machine was forced to retreat. The last time the R-Jarja was used was in the colony Moon Moon, where Chara forgoes weapons and attempted to grapple with the ZZ Gundam. Judau managed to grab one of his hyper beam sabers and used it to destroy the R-Jarja. Chara escaped just before it exploded, but was captured by her adversary.

In U.C. 0096, after the Laplace Incident, the Mastema special forces were sent by the Earth Federation to investigate part of the shattered asteroid, Axis. During the investigation, the group came under attack from the RX-160G Byarlant Isolde. While searching in a private dock for MS to pilot, they found an R-Jarja amongst the machines there and Arlette Almage requested it to be used, as she had previously worked on it. Additionally, the pilot, Danton Hyleg, had been a test pilot for the R-Jarja. 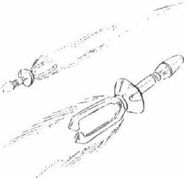 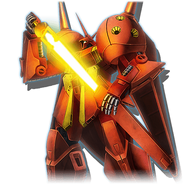 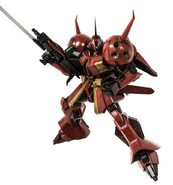