The RS-Jarja is a variation of the AMX-104 R-Jarja, which is derived from the YMS-15 Gyan. The overall specs of the suit were improved and it was made to deal with scout sniping in environments where Minovsky particles were dispersed. Keeping the performance of the R-Jarja, it has a new high-sensitivity sensor on its head and is equipped with a new radome pod on its left shoulder for observation and recon support for scout sniping battles. Its high output beam rifle boasts a very long range which it utilizes in conjunction with the radome pod.

Like the R-Jarja, the RS-Jarja has a triple missile pod built into each variable shield, and thanks to the articulated shoulders, the missile pods have a wide angle of fire. They are loaded with 12 AMS-05M missiles.

Equipped on the left shoulder is a radome pod for reconnaissance incorporating EWAC functions, lasers, ultrasonic sensors, and optical sensors. 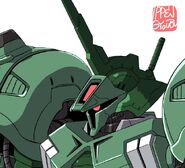