The AMX-104GG R-Gyagya is a Gunpla from Gundam Build Fighters Try. Based on the AMX-104 R-Jarja, it is built and piloted by Kaoruko Sazaki.

A customzed R-Jarja designed to be closer in appearance to the YMS-15 Gyan, the R-Gyagya is used by Kaoruko Sazaki, Susumu Sazaki's younger sister. Like its base machine, which is a commander type unit, the R-Gyagya also serves as the leader's unit for the Song Dynasty Vase team. Beside a change in color scheme, the R-Gyagya also has an elaborate head crest instead of its predecessor's simple head spikes, and a different set of weaponry with the beam saber being the only weapon retained. The new weapons includes a twin beam sword, a pair of gatling guns and a pair of shields equipped with missiles and beam blades that were given to Kaoruko by her brother. The suit usually engages in close combat using its twin beam sword and shields effectively, but it has no problem engaging enemies further away thanks to the gatling guns and the missiles in the shields.

A pair of gating guns are mounted on the rear shoulder binders, providing the suit with additional ranged firepower. They are mainly used to intercept missiles or to restrict enemy's movements during battle. When used, the arms have to be lifted until the guns are facing the target.

Mounted on the shoulders via flexible arms, the pair of shields were made by Susumu Sazaki, Kaoruko's older brother. They have high defensive strength, as shown when they managed to withstand a Seiken-Zuki from the BG-011B Build Burning Gundam, which was able to punch a hole through a colony. Due to their flexible joints, the shields can be positioned very freely. They can also be handheld if required, and have thrusters mounted at the back that can be used to improve the suit's manoeuvrability. The shields also possess offensive capabilities as they are equipped with missiles and can generate beam blades from the edge for close combat. They can also be used as hammering weapons, crushing enemy unit in between them with repeated blows.

Fired from the small silver circles on the shields, the shield missiles have high accuracy due to their homing capability. These missiles are difficult to avoid when they are fired as a salvo.

The main melee weapon of the R-Gyagya is a twin-bladed beam sword that is modeled after a medieval knight's lance, it is held in hand as the suit's primary weapon. 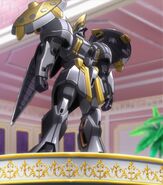 R-Gyagya Lineart
Add a photo to this gallery

Retrieved from "https://gundam.fandom.com/wiki/AMX-104GG_R-Gyagya?oldid=422783"
Community content is available under CC-BY-SA unless otherwise noted.