The AMX-103P featured four wire-guided manipulators and a mega particle cannon. It was equipped with additional propellant tanks to allow for longer operation time. The Waiqueure can also use a shield for defensive measures.

The AMX-103P Waiqueure was used by Haman Karn to defend a Neo Zeon resource base from Federal forces on Ganymede, a satellite of Jupiter. 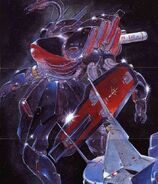 Waiqueure and another mobile suit.

Fanart
Retrieved from "https://gundam.fandom.com/wiki/AMX-103P_Waiqueure?oldid=447077"
Community content is available under CC-BY-SA unless otherwise noted.