Designed as an artillery bombardment unit for support purposes, it is originally meant to work in tandem with the AMX-101 Galluss-J. The Zssa is notable for the large number of missiles in its stocky yellow frame. Besides these 44 missiles, it is also armed with two 30mm vulcan guns, four beam sabers and a scattering beam gun. When tested by Mashymre Cello, the suit also carries an optional shoulder missile pod. After obtaining satisfactory test results, it was put into mass production and an optional booster pod was created for it. This booster pod not only provides the suit with additional thrusters and flight ability in the atmosphere, but is also armed with two of the shoulder missile pods and two 4-tube missile pods.

Mounted in the collar, the pair of 30mm Vulcan guns have 800 rounds of ammunition. These small caliber (for a mobile suit) shell firing weapons are meant for containing enemy units, intercepting incoming missiles, anti-personnel purposes and the likes.

The beam saber is a small device held in the mobile suit's hands when operated, and is powered by a rechargeable energy capacitor. It emits a blade of plasma contained by an I-field and is capable of cutting through any metal alloy not treated with anti-beam coating. The Zssa carries four beam sabers, with a power rating of 0.62 MW, that are stored in the legs.

A standard hand carried ranged beam weapon, it is powered by a rechargeable energy cap. Capable of firing concentrated mega particles, attacks from a beam rifle can damage any ordinary armor that has not been specially treated to resist it. Zssa uses the same beam rifle as the AMX-107 Bawoo, which can switch to a rapid-fire mode and is also known as a 'beam assault rifle'.

Used by The Sleeves' Zssa, this handheld beam weapon is originally used by the AMS-119 Geara Doga and is powered by a replaceable e-pac. With two muzzles, it can function as a normal beam rifle as well as rapid fire pellet-shaped beams.

Used by The Sleeves' Zssa, this pump-action shotgun was originally used by the MS-08TX Efreet and MS-18E Kämpfer during the One Year War. Despite its age, the shotgun was still a potent weapon, and capable of severely damaging the armor of modern mobile suits such as the AMS-129 Geara Zulu and RGM-89D Jegan D Type.

Used by The Sleeves' Zssa, it is the same forearm mounted shield as used by the AMS-119 Geara Doga. The shield provides the Zssa with added protection from enemy attacks and has anti-beam coating to defend against beam weapons.

An optional transformable flying unit mounted to the Zssa's back, it has four missile pods and its own cockpit, but is normally operated as an unmanned unit. Under gravity, the booster pod serves as a carrier unit, transporting the Zssa to its destination. In space, some of its fuel tanks can be set to detonate, allowing it to function as a bomb or launched as a giant anti-ship missile.

The AMX-102 Zssa was developed and used by Neo Zeon during their campaign against both the AEUG and Earth Federation during the First Neo Zeon War in U.C. 0088.[1] Some units were later used by Glemy Toto's rebellion faction during Neo Zeon's internal conflicts and were repainted gray.[2]

In U.C. 0096, a number of Zssa survived and were used by "The Sleeves" during the Laplace Incident. They were repainted in a green and given the distinctive markings featured on many of the mobile suits used by The Sleeves. During the Battle of Industrial 7, the Sleeves deploy their Zssa units to combat the forces of the SCVA-76 Nahel Argama. The AMX-101E Schuzrum-Galluss used a Zssa's booster pod to transport itself to the Nahel Argama for a direct attack on the battleship, and was supported by a Zssa armed with a shotgun when battling the ship's mobile suits.[3] 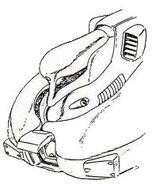 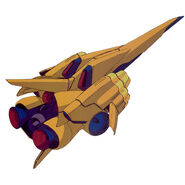 Sleeves' Zssa armed with Shotgun and Shield (Unicorn RE:0096 Ep19) 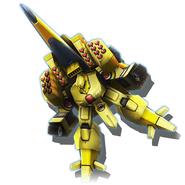 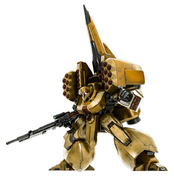