The AMZ-102C Zssa Kai was a prototype mobile suit. It was featured in the side-story manga Under the Gundam: Double-Fake.

The Zssa Kai was an experimental unit derived from the AMX-102, with its built-in missile launchers and scattering beams gun removed. The right manipulator is replaced with a "gun spear", a combination of a 3-barrel rapid-fire beam cannon and a heat knife. The unit also makes use of the Ak-90S optional booster pack rather than the standard version, and is armed with another 3-barrel beam gun and 12-tube missile launcher. 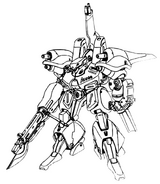