The AMX-101 Galluss-J was designed by Neo Zeon to serve as an urban combat mobile suit. In that capacity, it would serve as a "mopping up" unit after an area had been bombarded, likely from an AMX-102 Zssa. Apart from several missile launchers, the Galluss-J does not possess any powerful long-range weapons, instead specializing in close combat battle. For this purpose, the scientists of Axis seemed to have drawn inspiration from the MS-07 Gouf mobile suit series that appeared during the One Year War, and was noted for its excellent urban combat abilities. Like the Gouf, the Galluss-J was equipped with a set of light machine guns in the fingers of its left hand, weapons that were useless at long range but effective in close range. For additional power in hand-to-hand combat, the arms of the Galluss-J were designed to retract and, like a spring, gather potential energy before being released which added power to its punch attacks.

Equipped on both sides of the chest.

Mounted in the mobile suit's fingers are a series of small caliber machine guns. Also known as finger missiles, these weapons are intended for use in close-range combat or for attacking small targets, including personnel and missiles.

Hand carried in use, this weapon serves as the Galluss-J's primary means of ranged combat. It has a 4-tube missile pod on its left side and has a power rating of 3.8 MW.

The beam saber is a small device held in the mobile suit's hands when deployed and is powered by a rechargeable energy capacitor. It emits high-energy Minovsky particles to form a blade-shaped I-field (via manipulation of electromagnetic fields), and then fills this I-field shell with superheated Minovsky particle plasma to produce an effective cutting blade. The Galluss-J carries a single beam saber for melee combat.

One of the earliest Galluss-J units to be built was employed by Neo Zeon officer Mashymre Cello, who would use this mobile suit to attempt to ferret out the refugee AEUG battleship Argama from its hiding place inside Side 1's Shangri-La colony. That original prototype model was defeated by Judau Ashta in the MSZ-006 Zeta Gundam. The Galluss-J would see a limited production run throughout the Neo Zeon War and would commonly be used as a defense to guard Axis. During the latter days of the war, a number of these mobile suits were a part of Glemy Toto's separatist forces.

In U.C. 0096, the Galluss-J would later be seen in the hands of Zeon Remnants during the attacks on Dakar and Torrington Base. 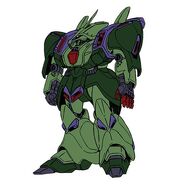 Galluss-J as it appears in the ZZ Gundam TV series 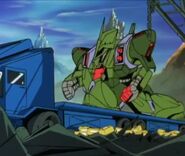 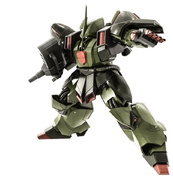