The AMX-101K Galluss-K is a Neo Zeon mobile suit and a variant of the AMX-101 Galluss-J. It is featured in the Mobile Suit Gundam Unicorn novel and its OVA adaptation.

The AMX-101K Galluss-K is a variation of the AMX-101 Galluss-J. The original Galluss-J's finger launcher on its left hand and shoulder-mounted missile pods were respectively replaced by a standard manipulator, and a backpack-mounted beam cannon of the same type as AMX-008 Ga-Zowmn's hyper knuckle buster. The Galluss-K is also armed with a 3-tube missile pod on the left forearm and the big gun of the MS-06K Zaku Cannon on the right forearm. The suit also has new spike shoulder armor.

Mounted on the backpack, it is a modified version of the Hyper Knuckle Buster used by the AMX-008 Ga-Zowmn.

Mounted on the hardpoint on the Galluss-K's left forearm.

Also known as Big Gun, this is the same weapon as used by the MS-06K Zaku Cannon. The launchers are magazine-fed and can fire small-caliber rockets rapidly. While the Zaku Cannon has two Big Guns mounted on its rear waist, the Galluss-K only has one Big Gun mounted on the hardpoint on its right forearm. 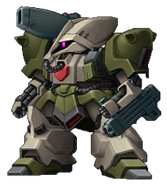