The AMX 101E Schuzrum-Galluss is a customized variant of the AMX-101 Galluss-J first seen on Mobile Suit Gundam Unicorn.

A mobile suit developed by the "Sleeves" based on the Galluss-J, it was customized as an assault machine with a focus on breaking through enemy positions, such as bases and ships. To suit its specialization, the weight of the Schuzrum-Galluss was reduced by more than 50% compared to its base machine. This was achieved through the removal of existing armor, such as those on the shoulders and legs, as well as the omission of cruising-use thrusters and associated propellant. As a result, the Schuzrum-Galluss has extremely high maneuverability, and excels in melee combat as there is now lesser armor that could get in its way during fighting. However, the lack of cruising-use thrusters caused it to rely on external propulsion unit such as the AMX-102 Zssa's booster unit for cruising purposes.

With only the minimum amount of armor, and the inability to return from the mission as the external propulsion unit is discarded after reaching the battlefield, the survivability of the Schuzrum-Galluss' pilot is very low, making it almost like a suicide unit. The Schuzrum-Galluss has no standard set of portable firearms, instead it was designed to fight with armaments from other machines in accordance to its mission. In fact, it is possible for the mobile suit to be deployed for combat with its entire body armed to the limit of its payload. The Schuzrum-Galluss does have a custom weapon in the form of a pair of Spike Shields that can be used for defense and offense. It also has a pair of magnet anchors in the shoulders that can be used in various ways, such as helping it land on enemy ships during assault missions.

The Schuzrum-Galluss can store two spike shields on its shoulders. Specially designed for the suit, they are a combination of a modified MS-06 Zaku II's shield with a modified AMS-119 Geara Doga's shield. When used, the spike shields are mounted over the hands like a pair of boxer gloves, and they served as effective bashing weapons due to their spikes. These shields can also be used for defensive purposes and appeared to be anti-beam coated. Can be switched for other weapons to fit the mission's needs.

Stored on the suit's back before use, the chain mine has a number of disc-shaped mines connected to each other by flexible cable. Each mine had magnetic claws on its underside, allowing it to be attached to objects. The chain mine could be thrown out like grenades one by one, laid on the ground or fixed to a building as a mine, or (most destructively) attached to a single enemy and detonated. Like the older MS-18E Kämpfer, the Schuzrum-Galluss was equipped with chain mines to breech through an enemy's defense line. Can be switched for other weapons to fit the mission's needs.

An electromagnetic wire anchor built into the weapon bays of each shoulder, replacing the Galluss-J's missile pods. By shooting out the magnet anchor and then reeling in its wire after the anchor has attached to a target, this equipment can be used in a variety of ways, such as restraining enemy units or help in boarding an enemy ship.

Prepares to use Chain Mine (Gundam UC) 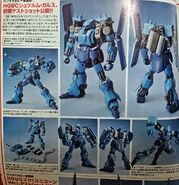 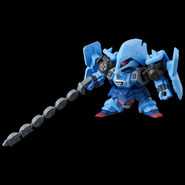