The AMX-018[HADES] Todesritter is a customized mobile suit featured in the video game Mobile Suit Gundam Side Story: Missing Link.

The Todesritter is a high performance mobile suit deployed by Neo Zeon in U.C. 0090, and is made from the wreckage of the RX-80PR Pale Rider with assistance from Anaheim Electronics. The Pale Rider's outdated semi-monocoque construction was replaced with a movable frame and the machine's various drive systems were changed to newer versions. The HADES, which is stored in a black-box inside the head unit, was left untouched by the Neo Zeon.

The Todesritter's armament include weapons diverted from other Neo Zeon mobile suits, allowing it to fight against contemporary mobile suits. Its combat capabilities are further boosted with the equipping of the INCOM, a type of wire-guided remote weapon, to effectively use the combat assistant function of HADES, and a pair of sub-arms that HADES could control independently were also added to the shoulders. The backpack is equipped with a sub-generator, two thruster binders and two propellant tanks.

Because the core unit of HADES is mounted on the head, the vulcans are mounted on turrets on both sides of the head. These light projectile weapons are used to intercept missiles, to destroy lightly armored vehicles, etc.

Located in the chest, these shell firing weapons use higher caliber rounds than standard vulcans. This gives the weapon higher penetration ability than vulcans and makes it better suited to damage a mobile suit.

The beam saber is a small device held in the mobile suit's hands when deployed and is powered by a rechargeable energy capacitor. It emits high-energy Minovsky particles to form a blade-shaped I-field (via manipulation of electromagnetic fields), and then fills this I-field shell with superheated Minovsky particle plasma to produce an effective cutting blade. The Todesritter is equipped with two beam sabers stored in the forearms.

A more powerful version of the standard beam saber, it has a larger handle and emits a larger, more powerful blade. The Todesritter is equipped with two hyper beam sabers stored on the mobile suit's backpack, which also doubles as beam guns for use in ranged combat.

A remote weapon designed for use with a quasi-psycommu system seen in the AMX-014 Döven Wolf but is now handled by the HADES in the Todesritter. These disc-shaped devices are armed with internal beam guns and controlled via wire cables. Every time an INCOM changes its flight direction, it deploys a tiny relay INCOM to hold the wire in place and maintain its connection to its parent mobile suit. When the pilot recalls the INCOM, it retraces its course as the wire is retracted.

Each INCOM mounts a beam gun with a power rating of 4.5 MW. Because of limitations the wires cannot supply enough power to allow the beam gun to be continually used. After a set number of shots the INCOM must be recalled so that the beam gun can be recharged.

Each of the Todesritter's INCOM is equipped with a Tri-Blade. The Tri-Blade is a throwing weapon originally used by the AMX-009 Dreissen, it has three high-speed rotating blades and can move towards its target using the single vernier mounted at the bottom. The mounting of the Tri-Blade on the INCOM allows it to have more flexibility through the use of wire guidance, trajectory shifts with INCOM relays, and mixed attacks with the INCOM's Beam Gun. This also makes it easier to recall the weapon to the mobile suit.

Originally used by the AMX-008 Ga-Zowmn, the hyper knuckle buster is a high-powered beam firearm, it has a power rating of 4.1 MW and is powered by an E-pack.

The Todesritter is equipped with the same shield as used by the AMX-107 Bawoo.

The shield features five built-in mega particle guns, each with an output of 0.77 MW. The muzzles can be moved to some extent, and the three central muzzles can be converged to create a more powerful beam.

Inherited from the Pale Rider, this system's name is an acronym for HYPER ANIMOSITY DETECT ESTIMATE SYSTEM. It is created based on data and samples of the EXAM System. When activated, the HADES forcibly disables all the mobile suit's limiters to draw out 100% of the machine's performance, it also transmits to the pilot the optimal solution from a learning computer and can even forcibly maneuver the mobile suit. Although imperfect, the system also sought to pre-read enemy pilot's thoughts via sensing the Psycommu waves. Additionally, to maximize the use of the HADES, Todesritter also used the system to improve the operability of its INCOMs and enable independent control of the sub-arms. The activation of the HADES caused the exhaust vents of the mobile suit to become red hot due to forceful venting of gases, and like the EXAM System, the mobile suit's sensors also glow red.

A pair of simplified arms mounted in the shoulders of the mobile suit, they unfold when in use. They are typically used by the Todesritter to utilize the hyper beam sabers in combat. Thanks to these hidden arms, the Todesritter can simultaneously deploy and attack with all four of its beam sabers.

The Marchosias unit successfully stopped and captured, through great effort, the RX-80PR Pale Rider in the late stages of the OYW. This unit was sent to Axis and was customized heavily using equipment from many other Axis mobile suits. The unit, now designated as the AMX-018[HADES] Todesritter, was once again seen in the battlefield on the year U.C. 0090 under the banner of Char's Neo Zeon facing off against the Glemy Faction Remnants.

The Todesritter's pilot is Chloe Croce, who was also the pilot of the original Pale Rider. Due to past experimentation from Augusta Newtype Lab, she suffers from mild cognitive impairment and memory loss. Now working for the Neo Zeon along with Vincent Gleissner, she soon encounters Annerose Rosenheim in a red NZ-000 Queen Mansa.

Together with Vincent Gleissner in his AMS-119 Geara Doga and Travis Kirkland in his MSZ-008 ZII, Annerose started to attack them, blaming Vincent, former captain of the Marchosias unit, and Chloe for the death of Albert Bell along with most of the Marchosias unit during the battle of A Baoa Qu. The battle ended with the mutual destruction of the Queen Mansa and the Todesritter. Chloe and Annerose, who finally came to terms with their pasts, both ejected and were rescued by Vincent and Travis. 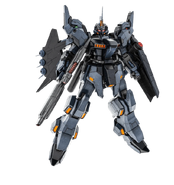 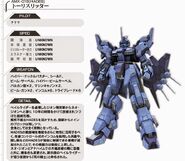