The design of the Gigantic was based on the data acquired from the stolen Gundam "Physalis". The Gigantic featured incredibly thick armor with extensive heat and radiation shielding to protect it from the hazards of its own nuclear blasts. The Gigantic also featured a pair of powerful thrusters on its skirt armor which granted it with great maneuverability for a unit of its size and bulk. But in regards to weaponry the Gigantic was not very well-armed at all. Except for a beam saber for use in emergency close combat situations, the Gigantic was only armed with its large atomic bazooka, making it suited only for carrying out nuclear attacks and not any other real combat.

When the Axis Zeon realized that their military might was insufficient to carry out a full-scale invasion of Earth, they drafted a couple of alternate plans to force the Earth Federation to give in to their demands. In addition to the colony drop strategy ultimately executed in Mobile Suit Gundam ZZ, the Axis considered carrying out nuclear attacks. To carry out these nuclear attacks the Axis Zeon required a new mobile suit capable of launching atomic warheads, and they developed the AMX-017 Gigantic to play the role.

However, Axis had a real problem in regards to their abilities to conduct nuclear attacks: They did not have any nuclear warheads to do it with. In order to acquire nuclear weapons Axis Zeon forces attempted to seize the Federation's Luna II asteroid base, but when their attack failed the prototype Gigantic project was consequently mothballed. 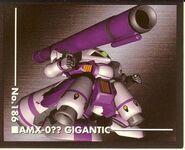 AMX-017 Gigantic Back and Front lineart