The AMX-015 Geymalk is a mobile suit that appears in Mobile Suit Gundam ZZ.

A Newtype-use mobile suit intended for mass production in the last weeks of the First Neo Zeon War, the AMX-015 Geymalk was one of the pinnacles of Neo Zeon's newtype-weaponry development. In terms of firepower, the Geymalk was one of the most heavily-armed mobile suits of its time, with over twenty beam weapons mounted on a slightly larger than average mobile suit body. Furthermore, the Geymalk was also equipped with a psycommu system, allowing its Newtype/Cyber Newtype pilot to control up to 28 child funnels and two larger mother funnels.

The mother funnels are similar to bits: each had their own generator and so did not need to return to the Geymalk to be recharged. Each mother funnel mounted a mega particle gun and carried 14 child funnels, which periodically return to the mother funnel for recharging. The pilot's commands were transmitted via a large psycommu control antenna on the Geymalk's head to the mother funnels, which relayed the commands to the child funnels. With this arrangement, the pilot could conduct remote attacks from extremely long ranges. This potent remote weapons system, combined with the mobile suit's own tremendous firepower, made the Geymalk one of the most powerful mobile suits ever conceived during its time.

The Geymalk is equipped with a pair of twin beam launchers, one mounted in each shoulder, and has a power rating of 2.3 MW.

Lining the sides of the Geymalk's hyper mega particle gun are a pair of twin mega particle cannons with a power rating of 4.5 MW.

The Geymalk mounts a pair of triple mega particle cannons with a power rating of 4.0 MW. They are built into the Geymalk's hands as "mitten" fingers. These fingers/mega particle guns serve poorly as manipulators, leaving the Geymalk unable to perform what would be considered "delicate" tasks for a mobile suit.

Within the Geymalk's forearms are triple grenade launchers. Each of these launchers can fire three explosive rounds that can destroy a mobile suit or damage a warship.

The Geymalk is equipped with a pair of beam rifles built into its thumbs. They are powered directly by the suit's generators and have a power rating of 2.3 MW.

The Geymalk stores a pair of beam sabers in the knees with power ratings of 0.85 MW. They are specially designed to be used by Geymalk's unique hands.

The Geymalk's most powerful beam weapon is a hyper mega particle cannon mounted in the center of the torso. With a power rating of 30.5 MW, it is one of the strongest beam weapon used by a mobile suit during the First Neo Zeon War.

The Geymalk features two mega beam cannons in the legs, below the beam saber's knee storage rack, and each cannon has a power rating of 3.8 MW. During use, the cannons rise up and extend.

The Geymalk has a mega particle cannon mounted in the pelvis, with a a power rating of 6.2 MW.

The Geymalk mounts a pair of large remote weapons known as mother funnels on its backpack. Though referred to as "funnels" these weapons are technologically "bits" as they possess their own power reactor. Both mother funnels are equipped with a single mega particle gun, however the true purpose of these mother funnels is to serve as carrying pods and recharge stations for 14 smaller child funnels each.

Stored within each of the Geymalk's mother funnels are 14 child funnels, for a total of 28 funnels. These funnels are remote weapons powered by a rechargeable energy caps. Their energy is severely limited and must routinely return to their recharge racks in the mother funnels for their energy to be restored. Each funnel is equipped with a beam gun that has a power rating of 1.8 MW.

Developed during the One Year War by researchers of the Flanagan Institute, it is a mind-machine interface designed to receive and translate a Newtype's powerful thoughtwaves (similar to regular brainwaves, but not electrical in nature) into computer commands. Using this interface, a Newtype pilot can direct remote weapons, and operate huge mobile armors, by thought alone. The Principality forces based at the asteroid Axis succeed in miniaturizing the psycommu system, so that it can be installed in regular-sized mobile suits like the AMX-004 Qubeley.

The Geymalk was intended for mass production but only one unit is known to have been built. It was operated by Haman Karn loyalist and unstable Cyber Newtype Chara Soon, during the last days of the First Neo Zeon War while Neo Zeon was being torn apart by internal conflicts. In the final battle, Chara's Geymalk took on around six AMX-004G Qubeley Mass Production Types and destroyed them all, with the Geymalk itself exploding after crashing into the last Qubeley Mass Production Type.

Close up of Mother Funnels

As featured in Gundam Calendar 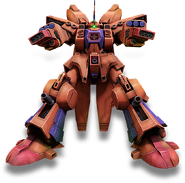 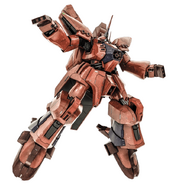