The AMX-014 Döven Wolf is a highly advanced mass production mobile suit built by Neo Zeon. Majority of the technology employed in the suit originated from Earth Federation produced prototype machines that ended up in the hands of Neo Zeon, such as the wreckage of the MRX-010 Psyco Gundam Mk-II and the ORX-013 Gundam Mk-V. Other advanced technology, such as the Quasi-Psycommu System, were field tested by earlier suits such as the AMX-103 Hamma Hamma.

One of the reasons the Döven Wolf is so powerful is because of its powerful Minovsky Ultracompact Fusion Reactor, which has a power output of 5250 kW, the highest reactor output seen in a mass-produced mobile suit during the First Neo Zeon War, which was only surpassed at that time by unique units such as the AMX-015 Geymalk or the MSZ-010 ΖΖ Gundam. Its high reactor output allowed the Döven Wolf to power a large number of powerful beam weapons placed throughout its body. These beam weapons include two abdominal mega particle cannons, a pair of backpack-mounted beam cannons, and a powerful beam rifle/mega launcher. Apart from its beam weapons, the suit also has two backpack-mounted missile launchers, a pair of torso mounted grenade launchers, a pair of 30mm vulcan guns, plus an optional pair of back-mounted anti-ship missiles.

However, the Döven Wolf's most powerful feature is its Quasi-Psycommu System, which enables ordinary pilots who are not Newtypes or enhanced humans to operate remote-controlled weaponry. The Döven Wolf has four wire-guided remote weapons that utilized this system, the two INCOMS on its backpack that is armed with a beam gun each, and a pair of beam hands, wire-guided arms with built-in beam guns. These weapons bring the Döven Wolf's ranged beam weapon count up to nine, and are used for all-ranged attacks that can easily overwhelm enemy pilots. Pilots of the Döven Wolf have also employed the beam hands to pick up a discarded weapon or grab and restrain enemy mobile suits. The commander version of Döven Wolf is visually identical to the normal version, but its beam hands are wireless and hide a pair of simple arms within, which are revealed only when the former is deployed.

Apart from its vast plethora of weapons, the Döven Wolf maintains high maneuvering capabilities and decent speed for a mobile suit of its size thanks to multiple verniers and a pair of backpack booster binders which hold additional thrusters and provides extra control for the AMBAC system.

One of the main weapons for the Döven Wolf is a pair of abdominal mega particle cannons. These powerful beam weapons each posses a power rating of 5.3 MW, and are ideal weapons for inflicting heavy damage to enemy battleships or destroying a mobile suit in a single shot. They can be connected to the Döven Wolf's beam rifle to form a mega launcher.

The pair of 30mm head mounted vulcan guns are likely inspired by the ORX-013 Gundam Mk-V, one unit of which ended up in Axis Zeon's hands and was used to develop the Döven Wolf. These shell firing weapons have a high-rate of fire but little power, they are ideal for shooting down missiles or other small, lightly armored targets. The Döven Wolf's vulcan guns possess 300 rounds each.

The Döven Wolf features a pair of beam cannons mounted in its backpack booster binders. Each cannon has a power rating of 4.2 MW.

The Döven Wolf features a pair 12-tube missile launchers in its backpack booster binders. The missile tubes are loaded with AMS-01H Heavy Missiles.

AMS-01H heavy missiles are the model of missiles loaded into the Döven Wolf's missile launcher.

Each Döven Wolf can optionally mount a pair of AMS-09R Anti-ship missiles externally on its backpack. They are larger than the missiles in the missile launcher.

The standard close combat armament of most MS, beam sabers are powered by rechargeable E-Cap and emits high-energy Minovsky particles to form a blade-shaped I-field (via manipulation of electromagnetic fields), and then fills this I-field shell with superheated Minovsky particle plasma to produce an effective cutting blade. The Döven Wolf carries two beam sabers, with power ratings of 0.65 MW, stored in the hip armor.

Used by Worklach Banham's customized Döven Wolf, a giant beam saber is stored on the suit's right forearm. Originally equipped on the NZ-000 Queen Mansa, it has a power rating of 1.8 MW and features a broad beam blade that can slice off a regular mobile suit with ease.

The Döven Wolf has a pair of torso mounted grenade launchers.

The Döven Wolf's forearms can be launched and controlled via a guide wire, similar to the MSN-02 Zeong and the MRX-010 Psyco Gundam Mk-II, and maneuvered by built in verniers and small scale thrusters. A wireless version is used by the commander version of Döven Wolf. The beam hands are controlled through the quasi-psycommu system and can be employed to grab and hold enemy mobile suits, as a mid-range melee weapon, and possess an electrical shock ability that allow electricity to flow through the cable and arm into a grabbed enemy machine. This electrical attack is severely painful to the enemy pilot. Each arm also has a built-in beam gun inside in its palm.

A remote weapon designed for use with the quasi-psycommu system. These disc-shaped devices are armed with internal beam guns and controlled via wire cables. Every time an INCOM changes its flight direction, it deploys a tiny relay INCOM to hold the wire in place and maintain its connection to the mobile suit. When the pilot recalls the INCOM, it retraces its course as the wire is retracted.

Each INCOM mounts a beam gun with a power rating of 2.0 MW. Because of limitations, the wires cannot supply enough power to allow the beam gun to be fired continually. After a set number of shots, the INCOM must be recalled so that the beam gun can be recharged.

The Döven Wolf's most powerful and primary weapon is its beam rifle. With a standard power rating of 12.5 MW, it is more powerful than any other mass produced beam rifle at the time. A unique feature of this beam rifle is that it can connect with the abdominal mega particle cannons to form a mega launcher. With a power rating of 40.2 MW, the mega launcher is the second most powerful weapon employed during the First Neo Zeon War, surpassed only by the MSZ-010 ΖΖ Gundam's high mega cannon.

Used by Worklach Banham's customized Doven Wolf to increase its defensive ability, it is originally used by the AMX-103 Hamma Hamma. This shield has its own power generator to power several built-in weapons.

One of the weapons mounted in the shield are three fire-linked beam guns with a power rating of 1.8 MW each.

The shield stores two beam sabers that are hand carried when used and have a power rating of 0.74 MW each.

The third and final weapon mounted on the shield is a space mine launcher that carries eight rounds.

The commander version of the Döven Wolf has a pair of lower arms that are hidden by their wireless beam hands. These hidden arms are simple in design, possessing only three claw like manipulators, but allow the Döven Wolf to use handheld weapons such as beam sabers or the beam rifle while the beam hands are deployed.

The AMX-014 Döven Wolf is a mass-produced mobile suit introduced by Neo Zeon to serve as their mainstay mobile suit, beating out the competing AMX-011 Zaku III. While it is certain that the Döven Wolf used some design concepts from the salvaged MRX-010 Psyco Gundam Mk-II, the Döven Wolf is more influenced by the ORX-013 Gundam Mk-V, when a researcher defected from the Murasame Research Institute and took one of the three Mk-V units.

During the Neo Zeon civil war between Haman Karn's faction and Glemy Toto's faction, many pilots of the Döven Wolf joined the latter and used their mobile suits against the forces loyal to Harman. This badly decimates both sides, leaving what remained of Neo Zeon's advanced mobile suits to be badly outnumbered by the Earth Federation Forces's more conventional mobile suits.

After the first Neo Zeon War, the asteroid base Axis was placed under the control of the Earth Federation government. At this point, several Döven Wolfs which remained there as reserve fighting strength were captured. These units were transferred to Anaheim Electronics's Granada factory and modified into the ARX-014 Silver Bullets, which were used for technical research into the quasi-psycommu system.

Several Döven Wolfs operated by Neo Zeon remnants (equipped with disk-shaped sub-flight systems due to the high gravity of the Jupiter sphere) were also seen chasing an AMX-004 Qubeley Mk-II (presumably piloted by a surviving Ple clone) near the Jupitris II. These mobile suits were destroyed by Judau Ashta and his MSZ-010S ZZ-GR.

In U.C. 0096, a number of surviving Döven Wolfs were used by "The Sleeves" during the Laplace Incident. These mobile suits were repainted in a blue color scheme and given the distinctive markings featured on many of the mobile suits used by The Sleeves. 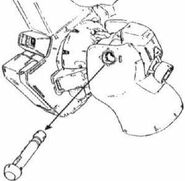 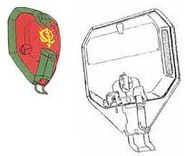 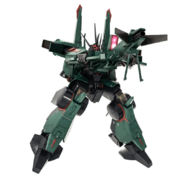 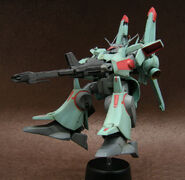 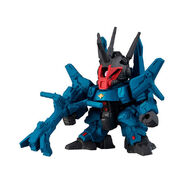