The AMX-011 Zaku III was a mass-produced general purpose mobile suit featured in the anime Mobile Suit Gundam ZZ. One of the mass-produced units was piloted by Rakan Dahkaran.

A descendant of the Zaku series of mobile suits, the Zaku III was designed to be highly versatile, being able to perform just about any mission role and many option parts were developed for it. The Zaku III is a big step up from the venerable MS-06 Zaku II, possessing better armor, over twice the power output, three times the sensor range, and four times the thruster acceleration, not to mention the various new beam weapons it wielded. Its backpack is equipped with integrated propellant tanks and flexible vernier thrusters, improving its cruising range and mobility.

In U.C. 0096, the Neo Zeon remnant group, the Sleeves, used modified Zaku III units. The Zaku III's front skirt armor were reconfigured with two sub-arms, allowing it to quickly deploy and wield both beam sabers at the same time, catching enemies off guard in close-quarters combat. The Sleeves' Zaku III's left shoulder armor is also replaced with one from the Zaku III Custom.

Each Zaku III possesses a high-output beam cannon mounted in the "mouth" of the mobile suit, with a power rating of 1.6 MW.

Mounted on the front skirt armor and hand operated in use, the barrel units of the pair of beam cannons can be ejected and used as beam sabers. Both the beam cannon and beam saber modes have a power rating of 2.8 MW. These are similar to the Beam Guns/Sabers of the AMX-004 Qubeley. The Sleeves' Zaku III replaced the beam cannon/beam saber with sub-arms carrying a beam saber each.

The beam rifle is a ranged beam weapon that fires condensed mega particles. Powered by a replaceable e-pac, it is power rated at 3.1 MW, but its output can be adjusted via the selectors on the sides of the rifle. A low output heat blade is mounted under the rifle's barrel for close combat use, it can be detached and used as a separate weapon. Additionally, the rifle also has a bipod for stable firing. This is the same handheld weapon as used by the AMX-104 R-Jarja.

A high output, long range prototype beam rifle developed for Zaku III's use. As its development took too long, the Zaku III was equipped with R-Jarja's beam rifle instead.

Same beam rifle as used by the AMX-011S Zaku III Custom. It is a high performance beam rifle developed as an optional armament for the standard Zaku III, has a long effective range and high output.

Used by The Sleeves' Zaku III, it is originally used by the AMS-119 Geara Doga, it's equipped with a grenade launcher at the bottom of the barrel and is powered by a replaceable e-pac.

The Zaku III can use a bazooka which fire large-caliber, explosive rounds quite effective against the armor of mobile suits and battleships.

Replacing the original beam cannon/beam sabers in the skirt armor, these beam guns likely have greater firepower but not the ability to generate a beam saber.

The Zaku III can be equipped with a different head unit armed with a pair of vulcan guns. These head mounted shell firing weapons have a high-rate of fire but have little power and are generally ineffective against mobile suits, though it can damage lightly armored areas such as the sensors. These weapons are ideal for shooting down small, fast moving, lightly armored targets such as missiles or small vehicles.

Mounted in the left shoulder armor of The Sleeves' Zaku III, it is the same weapon as used by the Zaku III Custom.

Mounted on the front skirt armor of the Zaku III used by The Sleeves, the pair of sub-arms replaced the beam cannon/beam saber. Sub-Arms are small manipulators which are normally retracted, folded, or otherwise concealed, like those installed in the PMX-003 The O. The Zaku III's sub-arms carry a pair of beam sabers, providing an element of surprise and tactical advantage in combat.

As the First Neo Zeon War raged on, the Neo Zeon military continued its development of new and more powerful mobile suits. Two competing designs were produced as potential new mass-production front-line units: the AMX-011 Zaku III and the AMX-014 Doven Wolf. The intention of the Zaku III's design was that it would be a new descendant of the old Principality of Zeon's venerable (and highly versatile) MS-06 Zaku II lines. The Zaku III featured a modular construction design, enabling armor, the backpack, and other components to be changed out and customized depending on the mission. Despite its high performance and versatility, however, the Zaku III design lost out to the more powerful Doven-Wolf. As a result, the Zaku III saw only limited production.

During the Dublin Colony Drop, one Zaku III was piloted by Rakan Dahkaran, who would use it to battle against the AEUG and shot down Karaba leader Hayato Kobayashi's Dodai Kai, killing him. Another unit was customized into the AMX-011S Zaku III Custom for use by the captain of the Endra and mobile suit pilot Mashymre Cello

The Zaku III units served during the brief Civil War that occurred during the end of the First Neo Zeon War, being piloted by Haman Karn loyalists. In U.C. 0096, a number of these mobile suits survived and were used by "The Sleeves" during the third of the major Neo-Zeon Movements. These mobile suits were modified with new weaponry and given the distinctive markings featured on many of the mobile suits used by The Sleeves. One such unit was seen fighting against a RGM-89D Jegan during the Battle of Industrial 7. After defeating the Jegan, it fired on the Unicorn Gundam, but its attack was evaded. This Zaku III was then destroyed by friendly fire from the Rozen Zulu. Some Zaku III units were also spotted on Earth in the same year, with one being piloted by the leader of an unknown group of Pirates who raided the Zeon remnant's base in New Guinea.

A Zaku III variant that switched out its standard backpack for the MS-14J ReGelgu's backpack, which is equipped with propellant tanks and a pair of 8-tube missile pods. 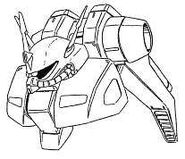 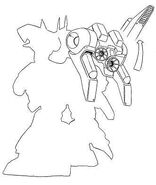 Backpack with the flexible vernier thrusters in motion 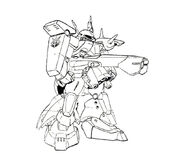 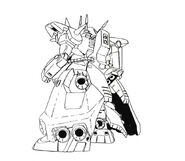 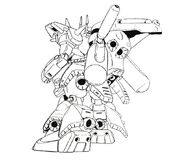 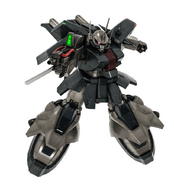