The Zaku III Custom is essentially the basic, modular AMX-011 Zaku III fitted with various optional parts to enhance its performance. Mashymre's Zaku III Custom has a new head unit which mounts a pair of vulcan guns instead of the head beam cannon, a different left shoulder armor with hide bomb dispenser, a new backpack with larger propellant tanks and high output verniers, a long rear skirt armor with thrusters that also functions as stabilizer, and finally different knee armor.

Danton's unit features an all-red color scheme reminiscent of Char Aznable's MS. In addition, it retained the original Zaku III's backpack and knee armor, and was equipped with a Beam Machine Gun originally used by the AMS-119 Geara Doga.

These head mounted shell firing weapons have a high-rate of fire but have little power and are generally ineffective against mobile suits, though it can damage lightly armored areas such as the sensors. These weapons are ideal for shooting down small, fast moving, lightly armored targets such as missiles or small vehicles.

Mashymre's Zaku III Custom uses a high performance beam rifle which was developed as an optional armament for the standard Zaku III. It has a long effective range and high output.

Used by Danton Hyleg's Zaku III Custom, it was original used by the AMS-119 Geara Doga.

Although the AMX-011 Zaku III design lost out to the AMX-014 Doven Wolf as Neo Zeon's new frontline mass-production mobile suit, a limited number of units were produced. These Zaku IIIs proved quite popular with many Neo Zeon officers and ace pilots fighting in the First Neo Zeon War. One Zaku III unit ended up in the hands of Haman Karn loyalist Mashymre Cello, who would employ his customized Zaku III in one of the last battles of the war. Although Mashymre's Zaku III was referred to as the AMX-011S Zaku III Custom, it was actually the basic Zaku III with various optional equipment for performance enhancement.

During the Battle of Axis, Mashymre Cello engaged Ple Two's NZ-000 Queen Mansa, and nearly scored a hit with his beam saber before being intercepted by AMX-014 Doven Wolfs, lead by ace pilot Rakan Dahkaran. In the ensuring battle, the more advanced Doven Wolfs trapped Mashymre's Zaku III Custom and nearly destroyed him, but Mashymre used his Cyber Newtype abilities to resist and destroy one Doven Wolf before he sacrificed himself by detonating his Zaku III Custom.

In U.C. 0096, after the Laplace Conflict, another Zaku III Custom appeared during the events as depicted in Mobile Suit Gundam Twilight Axis. This unit was built by Arlette Almage, and was meant for Char Aznable's use, although he opted for the Sazabi instead. The unit was later stored for research purposes in a mobile suit hangar located underneath a residential area in Axis. The prototype unit was later abandoned following the end of Char's Rebellion.

Later, when Mastema was attacked by Birnam forces, the unit was hastily reactivated by Arlette for veteran test pilot Danton Hyleg's use. During its fight with the RX-78AN-01 Gundam AN-01 "Tristan", the unit managed to damage the Tristan and destroy its Beam Rifle. After the battle the unit's OS was formatted and the unit permanently disabled, as it was too large to bring with them. 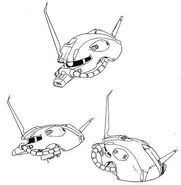 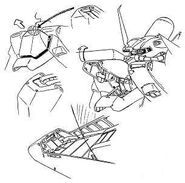 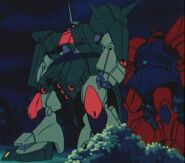 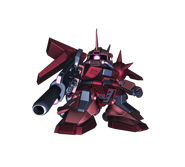 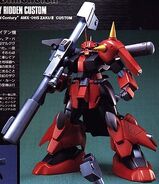