Designed based on the data of the MS-09R-2 Rick Dom II, the Dreissen is however much more similar in function to its distant ancestor, the MS-09B Dom, as it was designed with high speed ground combat in mind. Although larger than the Dom and Rick Dom II, the new materials used in Dreissen's construction make it much lighter and thus more agile. Unlike both the Dom and Rick Dom II, the Dreissen was designed with melee combat in mind, but it proved to be a versatile suit thanks to the triple beam cannons mounted in its arms. Although developed with an emphasis on ground combat, it can also operate in space without issues.

During the First Neo Zeon War, the beam cannons on Dreissen's forearms have exposed power supply cables, which can render the weapon inoperable if the cables are damaged during combat. Later, the Neo Zeon remnant group, the Sleeves, resolved this weakness by housing the cables internally in the arms. The Sleeves also enhanced the cannons' output and created armament holsters that can be attached to the suit's back in place of the tri-blades. These holsters are used to carry weapons such as the heat saber or the newly designed giant bazooka.

Mounted in each of the Dreissen's forearms is a triple-barreled beam cannon, which fire beams rated at 2.8 MW. The cover of the weapon slide up when in use. It is powered directly by the suit's generator, with each barrel also having an internal energy cap system. The weapon can fire beams rapidly from a single barrel or utilize all three barrels simultaneously to produce a stronger beam. The Sleeves' Dreissens have an improved power supply system for the beam cannons, internalizing the previously exposed power cables and also increasing the cannons' output.

Each Dreissen carries three tri-blades, throwing weapons that have three high-speed rotating blades each and can move towards their target using the single vernier mounted at the bottom. They are stored on backpack when not in use. Sleeve's Dreissen can carry anywhere from one to three tri-blades, depending on if any of the tri-blades' mounts are replaced by holsters for the giant bazooka and heat saber.

The beam lancer is a staff weapon that emits a short beam blade with high penetrating power, and can combine with the beam tomahawk into a naginata. The beam blade emitted has a power rating of 1.7 MW.

A standard hand carried ranged beam weapon, it is powered by a rechargeable energy cap. Capable of firing concentrated mega particles, attacks from a beam rifle can damage any ordinary armor that has not been specially treated to resist it. Dreissen uses the same beam rifle as the AMX-107 Bawoo, which can switch to a rapid-fire mode and is also known as a 'beam assault rifle'.

The heat saber is not part of Dreissen's original armament. By the time of Dreissen's introduction, the heat saber was an out of date weapon when compared to beam sabers that were the standard for mobile suit combat. Still, when put into service by the resource strapped Sleeves, the Dreissen was equipped with a heat saber like its predecessor, the MS-09R-2 Rick Dom II, due to the weapon's simple structure and excellent cost performance. When not in use, the heat saber is stored on a special holster (if it is installed) located at Dreissen's back which originally carried a Tri-Blade.

Like its predecessor, the MS-09R-2 Rick Dom II, the Dreissen can also utilize a Giant Bazooka for improved ranged combat capabilities. This Giant Bazooka is a newly designed weapon created by the Sleeves based on the Sinanju's Rocket Bazooka, it is used for both anti-MS and anti-ship combat. It is magazine-fed and capable of carrying 5 rounds per magazine. When not in use, the Giant Bazooka is mounted on a special holster (if it is installed) located at Dreissen's back which originally carried a Tri-Blade.

When Neo Zeon forces launched its war against the Earth, it rolled out a number of new mobile suits designed for ground combat and one of them was the Dreissen. Although initially produced in small numbers, the Dreissen's excellent performance and adaptability made it a popular and versatile mobile suit, and it was soon mass-produced for both ground and space combat.

The Dreissen was first seen aboard the Sadalahn-class battleship, with one unit piloted by Rakan Dahkaran, commander of the Mindra. During the AEUG's first attempt at disrupting Neo Zeon's invasion of Earth, Rakan and his Dreissen battled against Judau Ashta's MSZ-010 ΖΖ Gundam, proving how formidable the Dreissen is in close combat. However Judau's growing skill and the ZZ Gundam's power eventually overwhelmed the Dreissen. Though the Dreissen was destroyed, Rakan managed to escape.

Shortly after, the Dreissen was put into full mass production and participated in various battles of the First Neo Zeon War. Near the end of the war, a large number of Dreissens were taken and used by Glemy Toto's faction during the brief civil war amongst the Neo Zeon's forces. These machines were repainted with a gray color scheme.

Almost a decade later, in UC 0096, the Neo-Zeon remnant group "The Sleeves" utilized several surviving Dreissens as part of their mobile suit forces. These units were given a new color scheme and have the group's distinctive markings on their body. Some of these units were deployed to defend against the Federation's attack on Palau. One Dreissen used by veteran pilot Samuel fought against the RX-0 Unicorn Gundam and was destroyed by the Gundam's beam gatling gun.

Two Dreissens on a Base Jabber 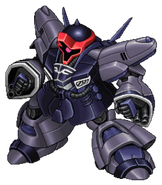 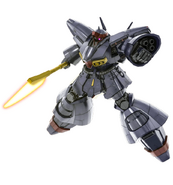 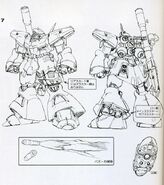 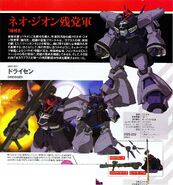