Built by Neo Zeon during the First Neo Zeon War, the Ga-Zowmn was developed from the AMX-006 Gaza-D. Originally known as "Gaza-E", it was hastily renamed when the prototype was rolled out as its performance surpassed previous Gaza series units. Despite differences in appearance, the Ga-Zowmn has high parts commonality with the Gaza-D, resulting in ease of production. Featuring a revised frame structure, the Ga-Zowmn has exchangeable, shoulder-mounted weapon units instead of the shoulder binders found in many Gaza series units. Typically, the weapon unit utilized is the missile unit.

The Ga-Zowmn's capabilities in anti-mobile suit combat are enhanced due to larger sensor radius and as its version of the Gaza series' Knuckle Buster, the Hyper Knuckle Buster, is not linked to the machine itself, allowing for more flexible usage. Its transformation system is also redesigned; its Mobile Armor mode is designed as a fighter bomber for anti-ship and anti-fortress warfare, and has improved firepower and maneuverability. The late production type features a head with a different shape and various other modifications such as additional thrusters to the knees.

The Ga-Zowmn is equipped with a pair of 80mm Vulcan guns and has 800 rounds of ammunition. The Ga-Zowmn's Vulcan guns are mounted in the forearms and are usable in both MS and MA modes.

The Ga-Zowmn is equipped with two beam sabers, one stored in each forearm. When stored, the beam sabers can be used as beam launchers for ranged attacks. Output 0.62 MW.

A large firearm based on the Gaza series' knuckle buster. Unlike its predecessors, the Ga-Zowmn's hyper knuckle buster is not connected to the machine's body and is fully handheld in MS mode, making wielding it more convenient. This change also resulted in the weapon being powered by an E-pack instead of receiving power directly from the mobile suit's generator like its predecessors, causing its output to be reduced to 4.1 MW. However, it has rapid fire capabilities. Also usable in MA mode where it attaches to the body.

The AMX-008 Ga-Zowmn was one of the mass production mobile suits deployed by the Neo Zeon in U.C. 0088 during the First Neo Zeon War. One Ga-Zowmn was piloted by Gottn Goh in a surprise attack on the AEUG flagship Argama launched from colony debris, and then over the city of Granada during an operation to block the Argama in its port and destroy it. This operation ended in disaster as a civilian spy had a change of heart and latched onto the mobile suit while carrying powerful explosives that then destroyed the machine. Production of the Ga-Zowmn continued up to the end of the war when many of them fought in and were destroyed during the Neo Zeon civil war.

In U.C. 0096, a number of these mobile suits survived and were used by the "Sleeves" during the Laplace Incident. These mobile suits were painted in a new color scheme and given the distinctive markings featured on many of the mobile suits deployed by the Sleeves. At least one unit was seen at the Battle of Industrial 7, where it attempted to engage the RX-0 Full Armor Unicorn Gundam in close combat, but was disabled after a short tussle. 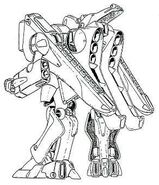 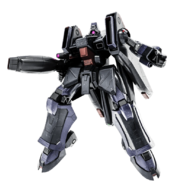