The AMX-007 (MMT-3) Gaza-E is a limited production transformable mobile weapon and is part of the Gaza series developed by the Zeon remnants based at the asteroid Axis. It is featured in the photo-novel Gundam Sentinel and the anime movie Mobile Suit Zeta Gundam: A New Translation.

After the completion of the AMX-003 (MMT-1) Gaza-C, the Axis forces begin developing new machines with higher performance and more specialized capabilities. The Gaza-E is developed simultaneously with the AMX-008 Ga-Zowmn, but where the Ga-Zowmn is designed for higher fighting strength in mobile suit mode, the Gaza-E emphasizes cruising performance in mobile armor mode. The mobile armor mode of the Gaza-E can even fly in atmosphere while carrying another mobile suit on its back, thus functioning as a sub flight system along the lines of the Base Jabber or the Dodai Kai series. Its design shares less components with other units of the Gaza series, resulting in low production numbers. Because the Gaza-E is designed to operate mainly in mobile armor mode, its handheld armament is limited to a projectile-firing bazooka. The large binders on its shoulders are equipped with weapon pods and powerful beam cannons, giving it high firepower in both mobile suit and mobile armor forms.

Each shoulder binder contains a pod to carry various weapons.

The beam saber is the standard melee armament for the Gaza-E. It is a small device held in the mobile suit's hands when operated and is powered by a rechargeable energy capacitor. The beam saber emits a blade of plasma contained by an I-field and can cut through any armor without anti-beam coating. When not in use, the Gaza-E's beam sabers are stored in the shoulder binders.

The Gaza-E's only hand-carried firearm. While powerful, the bazooka had a slow rate of fire and limited ammunition.

Due to its relatively high cost, which is twice that of a Gaza-C, the Gaza-E is produced only in limited numbers. A handful of these machines are deployed by the space battleship Gwaley to protect the New Desides as they escape from Ayers City on March 28, UC 0088. There are also reports that at least one Gaza-E is present aboard the space battleship Gwadan during the final stages of the Gryps Conflict. 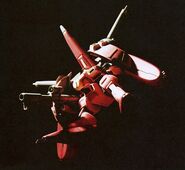 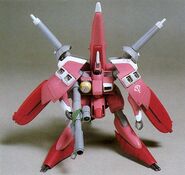 Appearance in the Zeta Gundam movies.