Although the Gaza-D was functionally the same as the AMX-003 Gaza-C, it has enhanced power output, speed and maneuverability. In addition to a pair of beam guns, two beam sabers, two leg claws and its "knuckle buster" beam rifle, the Gaza-D was also equipped with missile launchers and missile pods in its shoulder binders and added mega particle guns in its leg claws for additional firepower. In addition to its superior specs and increased armaments, the Gaza-D also featured an improved transformable frame that could, unlike the Gaza-C, handle multiple transformations without breaking down.

Compared to the Gaza-C, the Gaza-D has a much higher firepower in the form of two missile launchers mounted at the top of the shoulder binders. They fire AMS-01H Heavy Missiles.

The beam saber is a small device held in the mobile suit's hands when operated and is powered by a rechargeable energy capacitor. It emits a blade of plasma contained by an I-field and is capable of cutting through any armor without anti-beam coating. When not in use, the Gaza-D's beam sabers are stored in its shoulder binders.

A pair of small fire-linked beam guns are fixed on the Gaza-D backpack. Used mainly in mobile armor mode, these beam guns can't change their firing angle. Possess a power rating of 2.3 MW each and could destroy a MS with a well-placed shot.

Mounted on the right chest, this beam firearm is powered directly by the mobile suit's generator and has a power output of 8.5 MW, which is much higher than a standard beam rifle. The knuckle buster is equipped with a large sensor unit. Usable in mobile suit and mobile armor mode. The Gaza-D's right hand supports this weapon when it is being fired in mobile suit mode.

Introduced at the beginning of the First Neo Zeon War, the AMX-006 Gaza-D was a moderate improvement over Neo Zeon's mass-produced frontline model, the AMX-003 Gaza-C. As the Gaza-D's basic construction and transformation sequence were practically the same as the Gaza-C's, it was easy to mass-produce, as the existing Gaza-C production lines at the Axis asteroid base were easily modified to facilitate production of the Gaza-D. At the outbreak of the war, the Gaza-D often complemented - and eventually replaced - its predecessor as one of Neo Zeon's mainstay mobile suits. 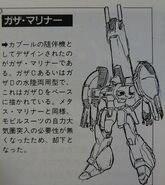 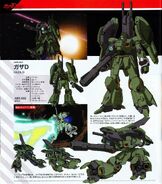