The AMX-004G Qubeley Mass Production Type is developed based on the AMX-004 Qubeley Mk-II which appears in Mobile Suit Gundam ZZ.

Because of the increased mass from the additional weapons, the Qubeley Mass Production Type could only achieve a maximum acceleration of 0.99 G which is less than the max acceleration of the previous Qubeley units and is the only area of performance where the mobile suit is inferior. This acceleration speed also made it one of the slowest mobile suits fielded during the First Neo Zeon War. The Qubeley Mass Production Type also lacks the psycommu controller headset used in the AMX-004-3 Qubeley Mk-II.

A pair of movable beam cannons are mounted on the suit's back and they have a wide-firing arc, from the back to the front of the mobile suit.

The Qubeley Mass Production Type's most dangerous armament, a total of 30 such psycommu controlled remote weaponry are stored in the mobile suit's rear armor/funnel container. These are the same weapons as the ones used by the Qubeley Mk-II. They are powered by an capacitor system and have to return for recharging after operating for a certain amount of time. The funnels are used for all-range attack, where they shoot beams at the target from multiple directions simultaneously, making it extremely difficult to dodge.

During the One Year War, the researchers of the Flanagan Institute discover that Newtypes emit powerful thoughtwaves - similar to regular brainwaves, but not electrical in nature - which they call psycho-waves. The Flanagan Institute goes on to develop a mind-machine interface called the psycommu (psycho-communicator) system, which receives these thoughtwaves and translates them into computer commands. Using this interface a Newtype pilot can direct remote weapons, and operate huge mobile armors, by thought alone. The Principality forces based at the asteroid Axis succeed in miniaturizing the psycommu system, so that it can be installed in regular-sized mobile suits like the AMX-004 Qubeley.

Following the successful testing of Newtype pilots Elpeo Ple and Ple Two using their Qubeley Mark-II units, Glemy Toto - claiming to be a genetically-engineered descendant of the late Principality of Zeon leader Gihren Zabi and intent on staging a coup against Haman Karn for control of Neo Zeon - began mass production of an improved Qubeley to be manned by his army of Ple clones. This resulted in the AMX-004G Qubeley Mass Production Type.

The Qubeley Mass Production Type was introduced in the last days of the First Neo Zeon War. With a Newtype army at his command, Glemy would start his civil war against Haman; however, very determined Haman loyalists - aided by a lot of luck and a bit of their own Newtype abilities - stopped the Ple clones and their mass-produced Qubeleys, resulting in an almost complete mutual annihilation of both Neo Zeon factions.

A heavily damaged unit was somehow in the possession of the Vist Foundation and was later used in U.C. 0096 to recondition Marida Cruz, who is one of the only surviving Ple clones. 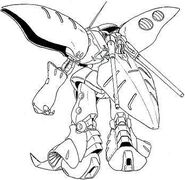 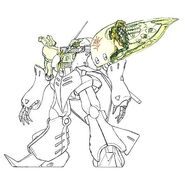 Destroyed by its own Funnels (GBD Ep 11) 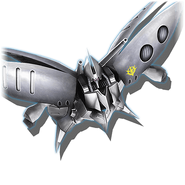 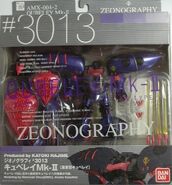 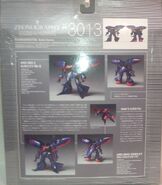