Like many mobile suits designed around the time of the Gryps Conflict, the Gaza-C line of mobile suits from Axis Zeon were built around the concept of a versatile transforming frame. However, while the Gaza-C was approved and put into mass production there were minor flaws in the design, and the manufacturing resources of the Axis asteroid was limited, so many of the Gaza-C's parts were recycled from older Gaza-A and Gaza-B construction mobile suits.

Despite this, the Gaza-C was a successful design that provided an excellent balance of speed, maneuverability, and firepower for little cost and was the first real mass-produced version of the Gaza-series. However, one major problem with the Gaza-C is that due to its flimsy construction, the mobile suit would literally fall apart after using its transformation systems only a few times; the average lifespan of a Gaza-C would be three combat missions. This flaw was remedied in later Gaza models.

With a power output at 6.7 MW, this powerful beam cannon is linked to a large sensor on the right side chest of the Gaza-C, making it very accurate. It mounts onto the backpack when in mobile suit and mobile armor mode, but is hand-carried when in mobile suit mode.

The beam saber is the standard melee armament for the Gaza-C. The beam saber is a small cylindrical device held in the mobile suit's hands when operated and is powered by a rechargeable energy capacitor. The beam saber emits a blade of plasma contained by an I-field, and is capable of cutting through any metal alloy without anti-beam coating. When not in use, the Gaza-C's beam sabers are stored in the shoulder binders.

Pair of small fire-linked beam guns are fixed on the Gaza-C backpack. Used mainly in mobile armor mode, these beam guns can't change their firing angle. Possess a power rating of 2.3 MW each.

Upon Neo Zeon's revival a transformable mobile suit was needed to stand against the Titans and the AEUG. Using mostly spare parts the Gaza-C was mass-produced, giving the Zeonic forces a basic unit, which in large numbers (and due to Zeon's veteran pilots) was quite dangerous.

When the Axis asteroid entered the Earth Sphere the Neo Zeon forces brought over 100 of these mobile suits which were deployed in battle for Neo Zeon's interests. It was the only transformable mobile suit mass-produced in such large numbers.

The AMX-003 Gaza-C would serve as the primary front-line combat mobile suit for the Axis forces during the Gryps Conflict, and during the early part First Neo Zeon War. However, as the resources available to Neo Zeon's military grew, production of the Gaza-C ceased due to deficiencies in the frame's design. Yet the design of the Gaza-C was popular enough that it served as the basis for a number of mobile suits Neo Zeon would field during the First Neo Zeon War, such as its direct descendent, the AMX-006 Gaza-D. It estimated that nearly 250 Gaza-C units were produced.

Although production of the Gaza-C would end in the year U.C. 0088, before the end of the First Neo Zeon War, a number of these mobile suits would survive to the year U.C. 0096. These surviving Gaza-C units would be operated by "The Sleeves". Due to the fact that The Sleeves lacked the resources to compete with the Earth Federation's production capabilities, they deployed any mobile suit they could get a hold of, even outdated machines as far back as the One Year War. These Gaza-C units would be repainted into a new color scheme and given the distinctive markings featured on many of the mobile suits used by The Sleeves. Some Gaza-C units were deployed by The Sleeves during the Federation's attack on Palau, where they performed poorly against the Earth Federation's more modern and advanced mobile suits. 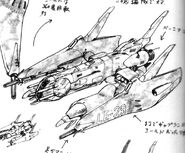 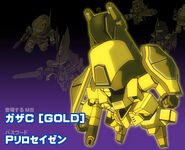 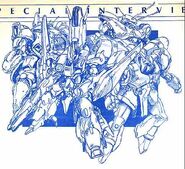 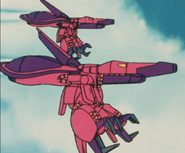 A pair of cruising Gaza-Cs (from Z Gundam TV series) 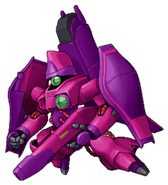 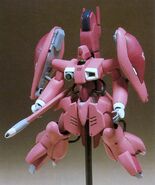 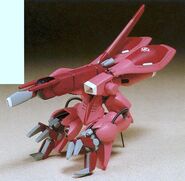 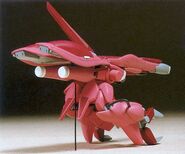 Retrieved from "https://gundam.fandom.com/wiki/AMX-003_Gaza-C?oldid=447149"
Community content is available under CC-BY-SA unless otherwise noted.