The AMX-002 (AMA-X2) Neue Ziel (ノイエ·ジール, Noie Jiiru?) is a space-use prototype mobile armor featured in the OVA Mobile Suit Gundam 0083: Stardust Memory. It was piloted by the "Nightmare of Solomon" Anavel Gato.

This massive mobile armor is donated to the Delaz Fleet by the Axis Zeon remnants who have made their home at the asteroid base Axis, in the outer reaches of the solar system. Technologically far superior to the mobile armors of the One Year War, the Neue Ziel is fast, maneuverable, and is also protected by an I-Field. It features large thrusters throughout the body, giving it high mobility despite its large size. In addition to its arsenal of missiles and mega particle cannons, it also sports a pair of computer-controlled claw arms which allow even non-Newtypes like Anavel Gato to carry out the dreaded multi-directional "all-range attack".

Mounted in the waist, this high output beam cannon is connected directly to the Neue Ziel's generator.

Four large missile launchers were mounted in the pair of hip-mounted boost binders, with each launcher carrying five large missiles.

The forearms of the Neue Ziel's main arms can be launched at enemy units via wire guidance, and then retracted using the same wire. Each wired claw arm is also equipped with a mega particle cannon that can emit a beam saber for close combat. Thanks to the new "half-control" system, even non-Newtypes can use the wired claw arms to conduct the dreaded multi-directional "all-range attack".

Two sub-arms are hidden in each shoulder armor. Like the wired claw arms, these sub-arms are also each equipped with a mega particle cannon that can emit a beam saber.

The "Half-Control" System utilizes a computer-guidance system to operate wire-guided weapons, like the Neue Ziel's wired claw arms, to perform "All-Range Attack". Previously, only newtypes can carry out such attacks, but with this system even non-newtypes can do it. However, conducting such an attack still places heavy burden on the pilot.

Developed by Axis engineers under the direction of Haman Karn, the Neue Ziel was one of the most powerful mobile armors of its time. Design of the Neue Ziel first began during the One Year War, however, development was postponed due to lack of resources. Construction of the mobile armor was finally made possible thanks to advances in various technologies and the wealth of resources in the asteroid belt. It was shipped out with the Axis Advanced Fleet when it departed for the Earth sphere in unofficial support of Admiral Aiguille Delaz and his fleet during Operation Stardust.

When Delaz's right-hand man and One Year War Zeon ace, Lieutenant Commander Anavel Gato, visited the Axis Advanced Fleet, the fleet's Admiral transferred it to him as a gesture of goodwill. The Neue Ziel enabled Gato to clear the path for Operation Stardust in the final stages of heated battle, and battled evenly against the Federation's RX-78GP03 Gundam "Dendrobium". However, the mobile armor sustained heavy damage from the Federation's Solar System II (a superweapon), which Gato had earlier crippled, and was finally destroyed when Gato crashed, kamikaze-style, into one of the Federation's Salamis class cruisers. 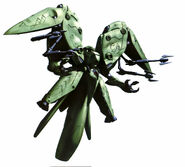 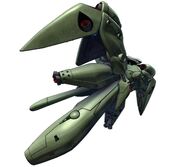 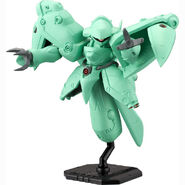