The AMX-001 (MSN-008) Prototype Qubeley is a mobile suit prototype that would be developed into the AMX-004 Qubeley.

The development of the Qubeley began shortly after the rollout of the MAN-08 Elmeth, late during The One Year War. This "MSN-008 Prototype Qubeley" was developed as a mobile suit version of the Elmeth. In order to reduce the Elmeth's massive size, a smaller Psycommu weapon was developed to replace the "Bit" remote weaponry. This new weapon, later known as Funnel, uses Energy-capacitator (E-cap) instead of built-in generator, thus requiring recharging after a certain period of deployment. Other armaments include a pair of mega particle cannons and beam sabers, both mounted in the arms.

The standard weapons of the Prototype Qubeley is a set of Mega Particle Cannons mounted in the forearms. Powered directly by the mobile suit's reactor, the cannons' high power output and precision make them highly dangerous.

Equipped in the palms of the Prototype Qubeley are a pair beam sabers used for close range combat. As these beam blades can weaponize quickly, they are highly effective during combat.

These shell firing weapons have a high-rate of fire but little power. They are ideal for shooting down small, lightly armored targets such as missiles, attack vehicles, etc. They are also often employed to deter enemy machines from getting into close-range combat.

These funnels are technological descendants of the Elmeth's remote bit weapons; but they are smaller as they lack their own power generators, instead using energy capacitors. This allows the funnels to be small enough so that a large number of them can be stored on a mobile suit, but requires that the funnels return to the tail binder for recharging after a certain amount of time.

The Flanagan Institute of Zeon developed a mind-machine interface called the psycommu (psycho-communicator) system, which receives these thoughtwaves of Newtypes and translates them into computer commands. Using this interface a Newtype pilots can direct remote weapons, and operate huge mobile armors, by thought alone. The Principality forces based at the asteroid Axis succeed in miniaturizing the psycommu system, so that it can be installed in regular-sized mobile suits like the AMX-001 Prototype Qubeley.

Similar to AMX-002 Neue Ziel, the Prototype Qubeley was never built before the War's end, but its blueprints were taken to the asteroid base Axis and later constructed there with an alternate model number AMX-001 as Axis's first experimental Mobile Weapon. Although the Psycommu system still makes it a bulky Mobile Suit at 25 meters in height, it was nevertheless considered a success. The Prototype Qubeley would later be perfected into the AMX-004 Qubeley and then the AMX-004 Qubeley Mk-II. 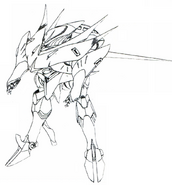 Retrieved from "https://gundam.fandom.com/wiki/AMX-001_Prototype_Qubeley?oldid=452134"
Community content is available under CC-BY-SA unless otherwise noted.