A customized Geara Zulu (Guards Type) used by Angelo Sauper, the chief of Full Frontal's elite guards, it is painted in his violet personal colors and featured more elaborate patterns on its chest as well as a blade antenna on its head. It carries a heavy armament backpack that not only improves the suit's thrust, but also has additional generator to ensure stable power supply to the suit's weapon, a stabilizer, and two large propellant tanks for increased operational time. The stabilizer and propellant tanks can be removed when not required. This backpack is designed as an optional equipment for the Geara Zulu, and is produced in limited number, but the Geara Zulu (Guards Type), such as Angelo's, receive priority in equipping it. The suit is armed with a Lange Bruno Gun Plus, a long-range weapon to support the MSN-06S Sinanju in combat, and it can be replaced with a beam shot rifle when needed. Other weapons include a beam tomahawk, shield, beam machine gun, and a submachine gun.

The only close combat weapon of the Geara Zulu (Angelo Sauper Use) is a beam tomahawk, which is stored on the rear skirt of the suit. The head of the beam tomahawk has two beam emitters, one on the side that emits the axe-blade, and the second on top that emits a beam spike that can be used for stabbing attacks.

The Geara Zulu (Angelo Sauper Use) can use the same forearm mounted shield as the AMS-119 Geara Doga for defense.

One of the weaponry designed for use with the heavy armament backpack, it is a modified version of the Lange Bruno Gun, a long-range support weaponry found on AMS-119 Geara Doga Heavy Weapons Type that shoots solid rounds. The Lange Bruno Gun Plus is specialized for space-use, and functions as a long-range beam launcher. It has an extremely high focusing rate, and fires a highly penetrative beam at a very fast speed.

A modified version of the MSN-04 Sazabi's weapon of the same name for use by a Geara Zulu, it is another weapon designed for use with the heavy armament backpack. It has two barrels, a bottom one for firing a diffuse beam, and another at the top for firing a normal beam. It has excellent rapid fire capability as well as long operational time.

A modified version of the MMP-80 90mm machine gun used by various Zeon mobile suits during the One Year War, it has a shortened barrel and stock. 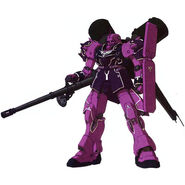 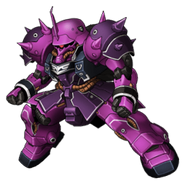 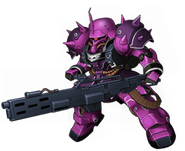 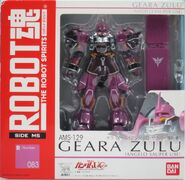 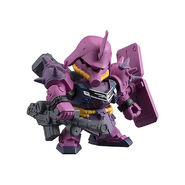 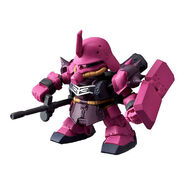