Generally, the standard armaments of the Geara Zulu includes a beam machine gun and beam tomahawk, although there is a wide range of weapons that can be equipped depending on the mission profile, and this shows the suit's versatility. The Geara Zulu can have a weapon mount placed on the back of its waist to carry several hand grenades and the beam tomahawk. Besides weapon and equipment variations, there is also a commander version with additional blade antenna on the head, a Royal Guard version and an aquatic version.

The standard firearm of the Geara Zulu, it rapid fires pellet-shaped beams and its firing and focusing rates are consistent with the standards at the time. By adjusting the irradiation time, the weapon can also function as a beam rifle. The magazine (E-pac) doubles as a foregrip, and has a banana shape, increasing the number of ammunition. Three sets of spare magazines can be mounted on the left and right sides of the front skirt armor. It has an excellent basic design and high expandability. Options for the weapon include a large sensor that directly links to the mobile suit's sensor, and a single round grenade launcher unit that is attached to the bottom of the barrel.

The only close combat weapon of the Geara Zulu is a beam tomahawk, which is stored on the rear skirt of the suit. The head of the beam tomahawk has two beam emitters, one on the side that emits the axe-blade, and the second on top that emits a beam spike that can be used for stabbing attacks.

The Geara Zulu is equipped with a shoulder shield on the right shoulder, similar to the model used on the MS-06 Zaku II. The shield can mount four Sturm Fausts.

A modified version of the Lange Bruno Gun, a long-range support weaponry found on AMS-119 Geara Doga Heavy Weapons Type that shoots solid rounds. The Lange Bruno Gun Plus is specialized for space-use and functions as a long-range beam launcher. It has an extremely high focusing rate, and fires a highly penetrative beam at a very fast speed. It is used one of the weapons designed for use with the optional heavy armament backpack.

A modified version of the MMP-80 90mm machine gun used by various Zeon mobile suits during the One Year War, it has a shortened barrel and stock. It can be stored on the shoulder shield.

Seen on Gilboa Sant's custom Geara Zulu, the 4-barrel beam gatling gun can fire volleys of particle beams and usually come in a pair. The two can be used as separate guns or can be combined together on the forearm of a MS. The gatling gun itself seems to have less firepower as separate guns than a beam rifle.

A weapon from the MS-07B-3 Gouf Custom, it is a shield with a powerful, drum-and-belt fed, 75mm Gatling Gun attached to it. The Gatling Gun can detach from the shield itself when it runs out of ammunition.

A projectile-firing bazooka, as its name indicates, the clay bazooka was originally designed to fire adhesive rounds which immobilize enemy machines rather than destroying them outright. However, this weapon can fire several different types of ammunition, and it's normally used with conventional explosive shells. This weapon was first used by the RMS-099 Rick Dias.

The same weapon as used by the Zaku II series, it can switch between semi-automatic and automatic fire.

A combination of two 280mm Zaku Bazookas into a single weapon.

A weapon from the Zaku II series, the Geara Zulu could mount a total of eight pods, two on each leg and four on the shoulder shield.

The same beam rifle used by the Marasai and Hizack, it is powered by a replaceable e-pac and is power rated at 2.2 MW.

Obtained from the Nahel Argama, it is the same beam rifle as used by the RGM-89D Jegan D Type. It has a short barrel for ease of handling, and is most effective in mid-close range combat due to its short firing range. Although its output is reduced, it has an excellent rate of fire, and can eliminate enemy accurately during melee combat when utilize in conjunction with the composite sensor at the top of the rifle.

Obtained from the Nahel Argama, it is the same close combat weapon as used by the RGM-89D Jegan D Type. The beam saber's output can be adjusted as it has two beam emitters. Via selecting the output and emitter, this weapon can emit a flat beam blade for slashing, or a slim beam blade with high penetration ability.

The same arm-mounted defense armament as used by the Jegan series, it is obtained from the Nahel Argama.

A large backpack designed as an optional equipment for the standard Geara Zulu, and produced in limited number. This backpack not only improves the suit's thrust, but also has additional generator to ensure stable power supply to the suit's weapon, a stabilizer, and two large propellant tanks for increased operational time. The stabilizer and propellant tanks can be removed when not required. One of the weapons designed for use with this backpack is the Lange Bruno Gun Plus.

A commander type Geara Zulu belonging to Gilboa Sant, a member of the Garencieres crew. Outfitted with the heavy armament backpack, it uses the Lange Bruno Gun Plus and a Beam Gatling Gun. Gilboa's Geara Zulu is destroyed by a stray shot from the Unicorn's beam magnum shot meant for Full Frontal's MSN-06S Sinanju whilst entering the atmosphere. 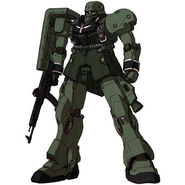 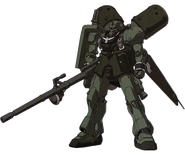 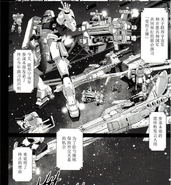 Geara Zulu used by the Republic of Zeon (Without Sleeves' insignia) 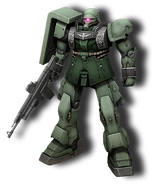 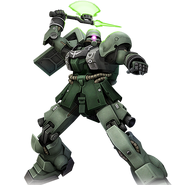 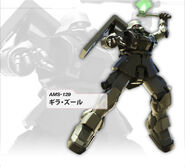 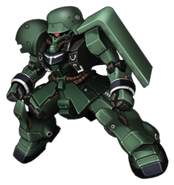 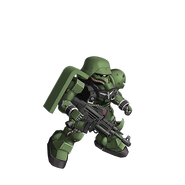 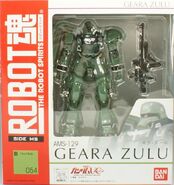