The AMS-129M Zee Zulu is a variant of the AMS-129 Geara Zulu featured in the photo-novel/OVA Mobile Suit Gundam Unicorn.

An amphibious mobile suit developed by Anaheim Electronics for the Neo Zeon remnants, the Sleeves, who then provided the machine to the Zeon remnants on Earth led by Yonem Kirks. The Zee Zulu uses the same basic frame as the Geara Zulu, but its exterior is modified to reduce underwater pressure and fitted with underwater equipment such as a vest-shaped diving device, ballast tanks around the neck, hydrojet engines, and underwater fins. These equipment were developed based on the operational data of the amphibious machines used by the Principality of Zeon, and enabled the Zee Zulu to have high underwater mobility as well as extended operating time in the waters. After coming ashore, the hydrojet engines and fins are purged to avoid deadweight, and its ground combat capability surpasses that of the Geara Zulu. In particular, its mobility on land is maintained at the same level as in the water. All of the armaments are designed for underwater combat, but they can be used on land without any problem.

A close combat weapon worn on both arms, also known as a "heat claw". It has three blades made of ceramic polymer compound and they flip forward when in use. Unlike older heat weapons, only the cutting edge of the blade, and not the entire blade, is heated to red hot during use. This is to achieve maximum effectiveness using the least amount of energy.

A pair of heat knives are stored in sheaths mounted on the rear waist. The knives' blades are made of ceramic polymer compound like the iron nail, and similarly, only the cutting edge of the blade is heated to red hot during use.

A dedicated firearm for the Zee Zulu based on the model used by the Geara Zulu. When used underwater, it can switch to a deflection-type shooting mode with increased beam convergence rate. It is also equipped with a grenade launcher under the barrel. When not in use, it is stored in a sealed firearm container mounted on the mobile suit's back.

The same melee weapon used by Gouf type MS. The blade is heated to high temperatures in order to increase its cutting capacity.

A squadron of Zee Zulus were fielded as escorts for the AMA-X7 Shamblo mobile armor, while it began its rampage at the port of Dakar in UC 0096. Avril Zech used a Zee Zulu to intercept a RAG-79-G1 Gundam Marine Type during the battle. Only two of the Zee Zulu pilots survived the Battle of Dakar and both of them boarded the Garencieres after the battle. The other two Zee Zulu supported other Zeon remnant forces, but were eventually destroyed by the RX-160S Byarlant Custom during the attack on the Torrington Base. 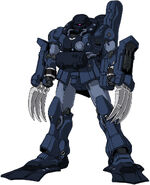