The AMS-123X Varguil is a mobile suit from Mobile Suit Moon Gundam. It is piloted by Agos Lagarto.

The Varguil was a prototype MS that incorporated next-generation Psycommu technology. However, this technology was later stripped and replaced with a more conventional Psycommu cockpit. It uses a generator 1.5 times more powerful than a Geara Doga's and has Gundarium alloy armor. Multiple thrusters are arranged across the body to make the MS more maneuverable. While boasting higher speed and maneuverability than other experimental mobile suits, it could not compete with the Jagd Doga and its Psycho-Frame cockpit. The Varguil was damaged during a battle with the Londo Bell forces and subsequently repaired with the head of the Psycho Gundam Mk-IV G-Doors belonging to the Titans remnants which drifted to the Moon Moon colony.[1] This version also has only one funnel rack, no attached propellant tanks, and no funnels.[1] Later, it also gained eight of the G-Doors' Psycho Plates.

Melee weapons equipped on the arms of the MS. They generate beam blades from both sides to attack enemies. They can also be used as remote controlled boomerangs via the Psycommu for an extremely limited amount of time.

The Varguil has one beam tomahawk for close combat stored on its backpack. It can be used as a beam saber for piercing, a beam hawk for slashing, and a beam sword tomahawk for anti-ship combat.

Since the Varguil was a prototype for the development of the Sazabi, it was able to fire scattering beams like the Beam Shot Rifle which would be created later on. It can also fire grenade rounds.

A prototype of the long beam rifle used by the Sazabi. It has a longer range and higher output then the beam rifle.

Equipped with 6 funnels stored the backpack-mounted rack. The shape is similar to the type used by Qubeley, but are larger and has increased operating time. However due to the instability of Psycommu, it often did not work.

After the Varguil was repaired with the head of the Psycho Gundam Mk-IV G-Doors, it gained a pair of head-mounted vulcan guns.

With the Psycho Gundam Mk-IV G-Doors' head, the Varguil is able to control the former's Psycho Plates. The Psycho Plates are Psycommu units secretly developed by remnants of the Titans derived from the Murasame Laboratory. Each of the plates connect to form a half-moon during standby and are separated when deployed. New Psycommu technology has been incorporated into their structures and they become both an offensive and defensive unit that can be remote controlled by the pilot's brainwaves.

During the late Universal Century, Neo Zeon worked on producing a new mass-produced MS, as well as experimentation for the Sazabi. One of the prototypes created was the Varguil, meant for Newtypes' use. Several units were created, but the project was later abandoned as the MS proved inferior in terms of Psycommu capabilities. One such unit was assigned to Agos Lagarto aboard the Atlante 3.

During a battle with Londo Bell's Ra Zeim corps, one of the Varguil's funnel racks were thrown as a weapon, as Agos was unable to activate the funnels. During this battle half of its head unit was also destroyed. After the battle, the Psycho Gundam Mk-IV G-Doors' head, which had was recovered by Moon Moon was placed on the Varguil by the Neo Zeons, as it was the only available Psycommu MS. 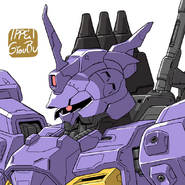