The AMS-119C Geara Doga [Full Frontal Use] is an experimental high-performance Geara Doga variant featured in the PlayStation 3 Mobile Suit Gundam Unicorn video game and UC-MSV. It is piloted by Full Frontal.

It is an experimental Geara Doga variant for verifying the durability of components due to renovation of the original unit. Although it is touted as a Performance Improvement Type unit, the machine's balance deviated significantly due to excessive reinforcement. Originally, it was meant to be dismantled for spare parts, however, it is later boarded by Full Frontal to give the impression of the "Return of the Red Comet".[1]

The same firearm used by the Geara Zulu. It rapid fires pellet-shaped beams and its firing and focusing rates are consistent with the standards at the time. By adjusting the irradiation time, the weapon can also function as a beam rifle. The magazine (E-pac) doubles as a foregrip, and has a banana shape, increasing the number of ammunition. It has excellent basic design and high expandability. Options for the weapon include a large sensor that directly links to the mobile suit's sensor, and a single round grenade launcher unit that is attached to the bottom of the barrel.

The standard firearm used by the Geara Doga. It has two muzzles, and rapid fires a series of pellet-shaped beams like a machine gun, but can also be used as a normal beam rifle. An optional grenade launcher can be attached to the bottom of the barrel.

A foldable shield attached to the left forearm. This shield also mounts a pair of two-tube grenade launchers, and contains carrying clips for four sturm fausts. The angle of the shield can be adjusted depending on the position of the machine, allowing for flexibility in defense and firing of the grenades.

A 2-tube composite multi-launcher, two units are mounted on the back of the shield. In addition to launching grenades, it can also be used as a smoke discharger.

A simplified, disposable rocket launcher. Due to its excellent cost performance, usage of the sturm faust continued even after the One Year War. As the warhead is not equipped with a guidance device, it is extremely hard to use the sturm faust to hit a moving target accurately. However, it is still a highly destructive portable weapon. Up to four units can be mounted behind the shield. The sturm fausts may be removed and fired as handheld weapons, or fired directly from the rack.

It is used by Full Frontal when the "The Sleeves" stole the MSN-06S Sinanju Stein and abandoned during the theft. It is later piloted by Neo Zeon remnants member Bath Panselinos, who descends to eastern Australia along with the Rebawoo in U.C. 0094. 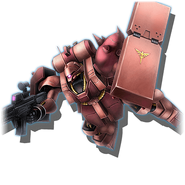 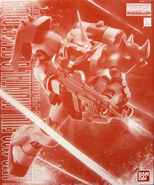