One of three DINN variants, the AWACS (Airborne Warning And Control System) DINN is designed specifically for search and recon missions on earth, and can be used for combat when necessary. When this DINN variation was introduced is unknown but since it was not seen in the first war, it is quite possible that it was created after the war. The suit is installed with new sensors in the aeroshell helmet, a huge radome on its back and dipping sonar array to fulfill its role, and has the same armaments as the normal DINN.

Mounted on the chest, two on each side for a total of four launchers. Each launcher contains 6 tubes to fit various weapons or equipment. When the suit is used for underwater searching from the air, the launchers are mounted with searchlights.

During the First Alliance-PLANT War, ZAFT introduces the DINN, a mobile suit used in aerial combat and missions. As with other mass-produced mobile suits, ZAFT creates several variants of the DINN for different missions. One such variant is the AWACS DINN, which seems to be created after the first war. During the Second Alliance-PLANT War, it plays a role in Operations Angel Down, a ZAFT mission to destroy the Archangel. During this mission, the AWACS DINNs are used to locate the ship. 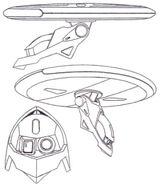 Retrieved from "https://gundam.fandom.com/wiki/AMRF-101C_AWACS_DINN?oldid=464993"
Community content is available under CC-BY-SA unless otherwise noted.