The AMF-101 DINN is a Mobile Suit in the Cosmic Era timeline.

The AMF-101 DINN is an aerial mobile suit of ZAFT (Zodiac Alliance of Freedom Treaty), as such it is designated as an Aerial Maneuver Fighter, thus the "AMF" in its code number. The suit was developed based on the ZGMF-515 CGUE and was lighter by about 43 tons to fit its role. The suit can adopt a flight mode when flying, in this mode the suit's wings will unfold and the aeroshell helmet will cover its head. The unfolding of the wings increases the mobility of the suit and helps with long distance flying, while the helmet helps to reduce air resistance. The price for the DINN's low weight however is thin armor; one DINN was reportedly torn in half from a collision with a F-7D Spearhead's wing.

The DINN is mainly stationed at ZAFT's planetary bases and carried by the Vosgulov-classs, from which they are deployed through specialized catapults. Weapons wise, the DINN is equipped with four chest-mounted 6-tube multipurpose launchers, and stores a single MMI-M7S 76mm heavy assault machine gun and an MMI-M100 190mm anti-aircraft shotgun in the hips storage racks. During and after the first war, ZAFT created at least three variants of the DINN. These models were the AMF-103A DINN RAVEN, the AME-WAC01 DINN Special Electronic Installation Type and the AMRF-101C AWACS DINN.

Mounted on the chest, two on each side for a total of four launchers. Each launcher contains 6 tubes to fit various weapons or equipment.

Following ZAFT's invasion of Earth during the First Alliance-PLANT War, a new type of mobile suit was needed to grant ZAFT forces the military power to fight against the Earth Alliance's own aerial machines. On May 20, CE 71, the DINN was eventually fielded and soon became one of the standard mobile suit used by ZAFT on Earth. The suit participated in many battles on the planet, including the massive Operation Spit Break, an attack on the EA's JOSH-A base. During this attack, ZAFT commander Rau Le Creuset piloted a silvery colored DINN. The suit was also stationed in some PLANT colonies, among them the ZAFT colony of Armory One. By the second war, the DINN was being slowly replaced by the more advanced and heavily armed AMA-953 BABI. 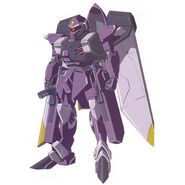 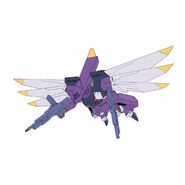 From the second opening of SEED 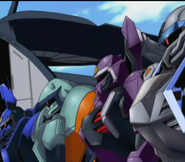 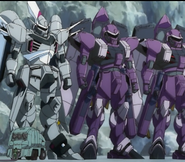 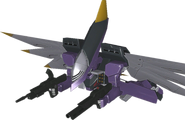 Retrieved from "https://gundam.fandom.com/wiki/AMF-101_DINN?oldid=448442"
Community content is available under CC-BY-SA unless otherwise noted.