The AMA-X7 Shamblo is a Neo Zeon amphibious prototype mobile armor. The unit is featured in the novel and OVA Mobile Suit Gundam Unicorn.

The AMA-X7 Shamblo is an amphibious mobile armor developed by Zeon remnants with the technical support of the supporters of Neo Zeon. The machine makes combined use of three different propulsion systems (jet propulsion, electromagnetic induction or MHD and Minovsky thermonuclear jet hover craft) to ensure low noise and high mobility, both in water and on land. Powered by Minovsky type generator(s) on its leg(s), and using the combination of submersible and hover systems, it can achieve low noise conditions and high mobility while in its underwater cruising mode. On land, it can use its Minovsky type generator and hover jet propulsion together to demonstrate surprising agility for an object of this size. Shamblo can use the defensive properties created by its 10 reflective bits and scattering mega particle guns, which can render both solid ammo and beam attacks ineffective. Due to its stealth, the Federation Navy called it the "Sea Ghost" or "Phantom of the Sea". It can be clearly seen that, when Zeon throws this high propulsion, high firepower mobile weapon into the battlefield, their battle strategy is to use them to create a breakthrough in the front-line battle.

The Shamblo had a pair of grasping claws on retractable arms. Each claw is nearly the size of a mobile suit and more than strong enough to crush, rend or smash such an unfortunate machine. Even a small aircraft carrier can fall victim to the mobile armor's enormous strength.

The dorsal surface of the Shamblo features what would appear to be vertically launched missiles, but are in fact Reflector Bits. These Bits launch like missiles but jettison the booster modules after a few hundred meters. They are held aloft by counter-rotating helicopter blades that unfold once the aerodynamic shell has fallen away. Once in flight, the units hover around the Shamblo and serve to reflect beams from the Scattering Mega Particle Guns. This allows the Shamblo to engage targets for which there is no direct line of sight, as well as the conventional tactics of engaging multiple targets or overwhelming a single target. There does not appear to be a provision for the Shamblo to recover its bits without assistance from friendly forces. The requirement that the Reflector Bit be in line of sight of the Shamblo's Scattering Mega Particle Guns does limit their usefulness. They also serve to augment the machine's defenses by moving to intercept incoming beam weapon attacks and deflecting them in a safe direction or even back at the attacker.

In May 1, 0096 UC, the president of Garvey Enterprise Mahdi Garvey commanded his three children, Loni Garvey on the defense systems, Walid Garvey in communications, and Abbas Garvey as the pilot to attack the port of Dakar in Senegal escorted by a squadron of AMS-129M Zee Zulu mobile suits as it begins its rampage. The MSN-001A1 Delta Plus and RX-0 Unicorn Gundam are deployed to stop the Shamblo, however its defense systems prove to be impossible to penetrate. Loni Garvey, unable to deal with the death and destruction she and her family are causing, climbs onto the Shamblo's bridge and tries to stop her father but is ultimately shot by him. However Loni's spirit communicates with Banagher Links and informs him of the Shamblo's vulnerable area. The Unicorn then proceeds to shoot the Shamblo's vulnerable area with its final beam magnum shot, killing Mahdi and both of his sons. The Shamblo brought death and destruction for over two hours with the estimated death toll being around 40,000.

The Shamblo was solely piloted by Loni Garvey, who used it to attack the Earth Federation capital, Dakar, where it was used to great effect, wiping out Dakar's defensive forces with its superior firepower and destroying the Earth Federation's Headquarters.

The Shamblo is again deployed at Torrington, where Loni used the Shamblo to attack the city itself rather than simply the military base there, despite explicitly being ordered to avoid excessive civilian casualties. The unit continued its unstoppable rampage into being intercepted by the RX-0 Unicorn Gundam, dropped from the Garencieres, which fired warning shots in front of the Shamblo. The Unicorn's pilot Banagher Links attempted to appeal to Loni herself, who refused to stand down, attacking the Unicorn with the Shamblo's claws until Banagher opened the Unicorn's cockpit, temporarily placating her. However, sensing the death of Yonem Kirks, she is driven hysterical and resumes her attack.

Forced to activate the Unicorn's Destroy Mode, Banagher attempts to disable the Shamblo with the help of Riddhe Marcenas, all the while attempting to talk Loni down. Riding on the transformed Delta Plus Banagher and Riddhe agrees to a co-ordinated strike to take out the Shamblo's cockpit to save the city. Due to her rage and sadness over Kirks the Shamblo's psycoframe responds by causing the unit to prepare to fire its main cannon at the two and the city. Sensing her sadness one last time, Banagher refuses to destroy the Shamblo, the Shamblo fires it's main beam cannon but Loni seemingly blocks it at the last moment with her reflectors while Marcenas seeing an opening, takes the Unicorn's Beam Magnum and shoots the mobile armor, incinerating the cockpit and its pilot instantly. With no control system, the Shamblo is disabled and shuts down, ending the Battle of Torrington. 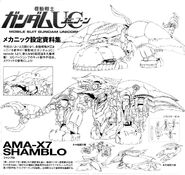 The Battle at the Port of Dakar 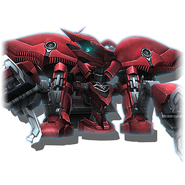 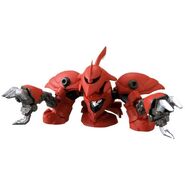