The AMA-953 BABI is a Mobile Suit from the Mobile Suit Gundam SEED Destiny television series.

The BABI is the successor of the AMF-101 DINN and is designated as an "Aerial Maneuver Attacker", thus the "AMA" in its code number. It was developed to maintain ZAFT's air superiority in the face of new flight capable MS deployed by the Earth Alliance and Orb Union, and can transform into a MA mode for high-speed flying by unfolding its wings and folding its legs onto its back. The BABI has better flight performance, aerial combat capabilities, firepower and armor than the DINN. It is equipped with a variety of beam and shell based weaponry, and some of its internal parts are compatible with those of the ZGMF-2000 GOUF Ignited.

Mounted in the chest, the "Ardor" Multi-Phase Beam Cannon is the suit's strongest weapon and can be used in MS mode to destroy enemy units in front, or in MA mode to attack facilities on the ground.

Mounted on the wings, the missile launchers are mainly used in MA mode to attack enemy units or for bombarding enemy facilities.

The BABI has four such machine guns, two on each wing. These machine guns are mainly used in MA mode for intercepting enemy's attacks.

A handheld beam rifle, it is usually held by the right hand and serves as a mid-range combat weapon.

The suit's second handheld weaponry, it is usually held by the left hand and fires large caliber shells.

The AMA-953 BABI is ZAFT's latest aerial mobile suit, designed to replace the older AMF-101 DINN. The BABI was first seen at ZAFT's Carpentaria Base, where they were deployed in the pursuit of a shuttle stolen by Lacus Clyne and Andrew Waltfeld in C.E. 74, but these units were swiftly disabled by the ZGMF-X10A Freedom Gundam.[1] They were later used in important battles like the one in Berlin, where they try to stop the massive GFAS-X1 Destroy Gundam.[2] Other units were used in the Logos capture operation during the attack on Heaven's Base as well as Operation Fury, during which ZAFT attacks the Orb Union.[3] 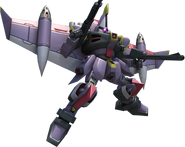 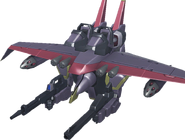