The AMA-103 Medussa is a transformable mobile armor featured in the manga Mobile Suit Moon Gundam.

A mobile armor developed following the footsteps of the AMX-103 Hamma Hamma, the Medussa is a highly maneuverable unit, combining the high mobility granted by its transformable mode with tremendous firepower provided by the four wired 3-barrel beam guns hosted in its limbs and controlled via the Quasi-Psycommu System. Capable of great stealth, the Medussa usually remains in its mobile armor form until a direct confrontation, switching to mobile suit mode to crush its opponent the 4 remote-controlled limbs.

To withstand the stress generated by the use of multiple remotes with the Quasi Psycommu System and the high mobility of the mobile suit, the Medussa's pilots such as the Schlange Team usually wear heavily armored normal suits that cover their entire body except for the eyes.

A 3-barrel beam gun is mounted in the palm of all 4 Medussa's claw like limbs. These beam guns are the unit's primary weapons and are the only weapons that draw power directly from the suit's power generator. They were designed from similar weapons used in the Hamma Hamma's arms, and are controlled via wires that keep the beam guns powered. Unlike the Hamma Hamma, the Medussa can effectively control all 4 beam guns with its Quasi-Psycommu System.

The quasi-psycommu was a computer control system designed to allow non-Newtype pilots to operate wire-guided remote weapons and conduct all-range attacks in a fashion similar to Newtype-use mobile weapons equipped with a standard Psycommu system. The development of this system was a major project for Neo Zeon's war efforts. Rather than sending and receiving data via thought waves as in a true Psycommu system, the Quasi-Psycommu system continually samples the pilot's electrical brainwaves, allowing the pilot to communicate specific instructions almost instantaneously. This system permits the use of simple remote weapons like INCOMs, but even with computer support, these devices are only capable of two-dimensional movement. The system built into the Medussa is a refined version of the prototype system installed in the Hamma Hamma.

Designed by Axis Zeon near the end of the First Neo Zeon War, the Medussa was adopted by Newborn Neo Zeon for its special forces and was known to be the nearly signature unit of commander Luce's forces.

In UC 0092, the Schlange Team, dispatched for a special mission, discovered that Mineva Lao Zabi and the crew transporting her had been tracked down by the Ra Gills, and started patrolling the area around Moon Moon in their Medussas. When the ship arrived and demanded to inspect the colony, the Schlange team ambushed them, with one of the Medussas using its remote controlled limbs to destroy one of Londo Bell's RGM-86R GM III.

Once the Schlange Team infiltrated the colony, they proceed to join their allies and, after identifying themselves to the Mineva's crew as subordinates of lieutenant commander Reuss, stated that they were now in charge of the mission. When the rest of the Federation’s GM III entered the colony cluster to retaliate, the Medussa Squad fired their beam cannons, an act that started a three-sided battle when one of the pilots of Mineva’s crew tried to stop team leader Gatt from damaging the colony (because the princess was still inside), prompting the sadistic pilot to kill him on spot as he stated it was not his responsibility and that the crew was just “dropout meant to cover his squad”.

The 3 Medussas later engaged the rest of Londo Bell forces and surrounded Saphira Gardner's MSZ-010A1 Theta Plus after her surprised attack was foiled by Gatt's I-Field, before the AMS-123X-X Moon Gundam entered the fight as well and destroyed Refi's Medussa with one of its Psycho Plates. 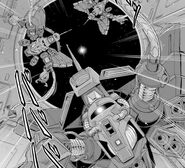 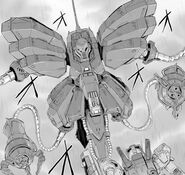