The AMA-01X Jamru Fin is a transforming mobile armor that first appeared in the anime series Mobile Suit Gundam ZZ. The unit was piloted by Neo Zeon's 3-D Team of Dale, Deune, and Danny.

The Jamru Fin was a prototype large mobile armor still in its development stage during the First Neo Zeon War; however, it was never completed. Despite this, the three unfinished prototypes were rushed into service and piloted by the "3-D" team of Dale, Deune and Danny. Intended specifically for space combat, the Jamru Fin was an extremely agile unit and its main weapon, the hyper mega cannon, boasted great firing range, making the Jamru Fin capable of taking out warships from the greatest possible distances. The Jamru Fin could adapt to a melee combat form, equipped with manipulators capable of carrying hand mounted beam guns and beam sabers. To further supplement the machine's incredible speed, the Jamru Fin could also be fitted with a "Mega Booster", which was fitted with extra weapons, extending its operating range and combat ability, while also increasing the output power of the hyper mega cannon. Another optional equipment designed for the Jamru Fin was the Nuclear Pulse Engine Booster. This super long-range booster was capable of operating around the strong gravitational influence of the planet Jupiter.

In the MS form, it is always exposed, but in the MA form, a part of the arm armor functions as a cover when not in use. It boasts the power to penetrate and sink the heavy armor of a battleship with a single blow from a distance just before the effective radius of the sensor. The output can be changed, and it will be iimproved from 6 to 10 MW in the MS form and 30.1 MW in the MA form.

Equipped on the wing tips of both shoulders.

Beam guns are built into the bottoms of each of the palms. By adjusting the output they can also be used as beam sabers.

A mega particle cannon mounted on the nose of a mega booster. It has an output of 6.2 MW by itself, but when combined with Jamuru Fin, the output will be improved to 40.5 MW.

A built-in missiles on the left and right sides of the nose of the mega booster. It can carry up to eighteen infra-red missiles.

A total of 2 guns are equipped under both wings.

Mounted at the bottom center of the mobile suit.

Originally meant as a powerful space-only mobile armor for Neo Zeon's space forces, the Jamru Fin prototypes were rushed through production due to over consumption of time. As a result many makeshift part were added mainly to the arms and shoulders.

The three Jamru Fin prototypes were given to Neo Zeon's 3-D Team and were used during the First Neo Zeon War. When in battle against the AEUG's "Gundam Team", their 3-D style of attack pattern proved highly effective. During the Neo Zeon Civil War the three Jamru Fins were seen in combat, however, their fate is unknown. 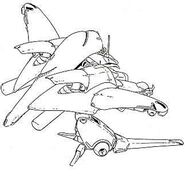 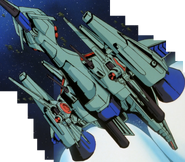