Developed for the role of defending large bases, the Zero GR was equipped with a large number of powerful beam weapons which could suppress the enemy with overwhelming firepower, and a defensive I-field generator used to neutralize incoming beam attacks. Originally, an auto-pilot program would be equipped to help maneuver the cumbersome Zero GR, while the pilot would only need to operate the weapons. However, during a mock battle, Char Aznable's outstanding piloting skills allow him to manually operate the entire machine, destroying every indicated target, and leaving the Zero GR unscathed. Although the Zero GR was a powerful mobile armor, Char Aznable disapproved of its low maneuverability.

Vulcan guns are typically small-caliber weapons with a high rate of fire that serve as mid-to-close range defensive weapons. They typically do not have the power to damage the armor of a mobile suit, but can be used to restrict enemy mobile suit's movements, intercept missiles and the likes.

A mega particle cannon is located in the Zero GR's "mouth". The beam fire from this weapon can destroy any mobile suit with a direct hit.

The primary weapon of the Zero GR are five mega particle cannons mounted on moveable turrets. Their beams can tear through most conventional armor material.

The AMA-00GR Zero GR is a mobile armor developed by the Zeon remnants at Axis. Designed with location defense in mind, the Zero GR is monstrous in size, even more so than other Mobile Armors, armed with enough firepower to rival an entire enemy fleet. Commissioned by Admiral Dozle Zabi during the One Year War, the Zero GR was meant to be issued to Char Aznable, until the death of Garma Zabi served to pull Char away from Dozle's command. In the time since the end of the One Year War, Axis Zeon managed to complete the Mobile Armor aside from the final settings to the controls. The unit was given to Char Aznable upon his arrival at Axis, in spite of his apprehension towards piloting Mobile Armors. Soon after, the Zero GR underwent combat testing under the skilled control of Char.

Instead of following the recommended method of piloting the Zero GR, allowing the computer interface to handle flight mode while the pilot focused on the weapons systems, Char managed to control the large weapon during mock combat with a squad of Gelgoogs. Eliminating all seven units with only one minor hit, easily deflected by the I-Field, the Zero GR performed well above expectations at the hands of Char. Though only completing three test flights, the accumulated data was sufficient for immediate combat deployment. The capabilities of the machine were acknowledged even by Char Aznable, who admitted to having no issues regarding the huge weapon's mobility. Regardless, though the single strike on the Zero GR would have been deflected by the I-Field Generator, the seasoned pilot disliked the fact he could not avoid being hit because of the size of the weapon.

The Zero GR would soon see actual combat. Drawn in by a splinter faction of Zeon interested in restarting the war, a Federation fleet discovered the far-flung asteroid base Axis, intent on destroying the Zeon homeland. Without permission, a young Haman Karn entered the battle zone in her customized Rick Dom, the Schnee Weiss, aiming to prove herself by destroying the Federation battleships alone. Unable to launch in his Gelgoog due to maintenance, Char sortied in the Zero GR in pursuit of the inexperienced Newtype. Forced to launch in the mobile armor, Char made good use of its intimidating size and overwhelming firepower to subjugate the enemy fleet and rescue the stranded Schnee Weiss moments before GMs threatened to destroy the disarmed mobile suit, Haman left catatonic inside the cockpit.

The data from the Zero GR would later be used to develop the AMX-002 Neue Ziel and the NZ-333 α Azieru mobile armors. 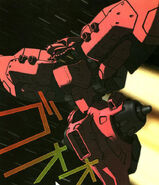