The Neue Ziel II is a variant of the original AMX-002 Neue Ziel.

The Newtype-use variant of the Neue Ziel, the Neue Ziel II features a normal Psycommu System instead of the Half-control Computer System used by its ancestor. Its claw arms are no longer detachable and features less weaponry, but the funnel weapons allows it to wirelessly perform an all-range attack.

A special weapon of the Neue Ziel II was a set of two heavy claw arms. Weapons wise, each arm mounted a single mega particle cannon and a beam saber and was powerful enough to smash into the bridge of a spaceship.

Vulcan guns are typically small-caliber weapons with a high rate of fire that serve as mid-to-short range defensive weapons that are used to shoot down small, fast, and lightly armored targets such as missiles or remote weapons. Vulcan guns typically do not have the power to heavily damage the armor of a mobile suit, though it is possible to deal light damage. Because of this vulcan guns will also be used to restrict an approaching enemy mobile suit's movements as most pilots will try to avoid taking unnecessary hits.

Mounted within the main body were a set of missile launchers. These rocket-propelled weapons were used for bombardment and to deal damage to heavily armored enemies.

Hidden within the main body of the Neue Ziel II are a set of funnels. The remote funnel weapon was based off of the Elmeth's larger remote bit, its smaller size is due to how it uses an energy capacitor system. Because the funnels don't have their own power generator they must return to the mobile suit to recharge after a certain amount of time. The funnels are used to create an all-range attack from multiple vectors, essentially creating a cage of beams that is impossible to dodge except for the most agile of mobile suits and the most skilled of pilots.

During the One Year War, the researchers of the Flanagan Institute discover that Newtypes emit powerful thoughtwaves - similar to regular brainwaves, but not electrical in nature - which they call psycho-waves. The Flanagan Institute goes on to develop a mind-machine interface called the psycommu (psycho-communicator) system, which receives these thoughtwaves and translates them into computer commands. Using this interface a Newtype pilot can direct remote weapons, and operate huge mobile armors, by thought alone. The Principality forces based at the asteroid Axis succeed in miniaturizing the psycommu system, so that it can be installed in regular-sized mobile suits like the AMX-004 Qubeley. The Federation Forces, meanwhile, concentrate on developing artificially enhanced cyber-Newtypes to operate their psycommu weapons.

A protective device which uses a powerful I-field to deflect enemy mega particle beams. Due to its high power requirements, the I-field generator can only be installed in large mobile weapons. When the generator is activated, the I-field forms an invisible barrier around the mobile weapon, protecting it from incoming beam attacks. However, this barrier has no effect against solid objects like missiles and projectiles, and beam weapons can still be used at point blank range within the barrier's boundary.

The Neue Ziel II was supposedly painted red and intended to be tested by Char Aznable. Development had been carried out in the early stages of the Gryps Conflict, however, Char eventually left Axis and the Neue Ziel II's construction was cancelled. 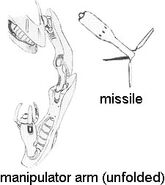 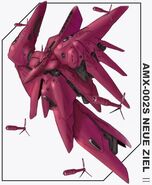 Retrieved from "https://gundam.fandom.com/wiki/AMA-002S_Neue_Ziel_II?oldid=368731"
Community content is available under CC-BY-SA unless otherwise noted.