The Gundam Wiki
Register
Don't have an account?
Sign In
Advertisement
in: Characters, Universal Century characters, Female,
and 2 more
English

ALICE, or “Advanced Logistic and Inconsequence Cognizing Equipment”, was an experimental Artificial Intelligence installed on the MSA-0011 S Gundam. Although "She" is never visually present, Alice is considered the heroine (though not protagonist) of the Gundam Sentinel photo-novel. While Ryou Roots is the clear protagonist, most of the significant accomplishments of the S Gundam are at the hands of ALICE, overriding Roots's attempts to control it. She is directly responsible for the deaths of all the significant antagonists in the story. ALICE is also the character that has the greatest character development of any protagonist in the story.

ALICE was an AI designed to replace a human pilot, however she was designed to learn through experience in a similar, albeit more complete and accelerated manner than that of a human. In order to facilitate this and evoke the most dramatic results she was programmed to respond in a human way to that pilot much as if they were the only other being that existed in the universe and absolutely the only one that she would have direct contact with. For this reason, and to implement a stronger system it was decided that she would have a female personality and be equipped with a male pilot. He would fulfill all the roles in life that she would need, initially as a father, then as she grew older he would act as a trusted friend, and ultimately as a lover.

ALICE was cruelly forsaken to eternal loneliness in this manner as it was decided that love is transitory if left to blossom and that if there were a mutual affection between her and her pilot it would end as one or the other (most likely him) had these feelings pass and moved on. In order to facilitate the maximum performance possible it was decided that ALICE's love must be unrequited and so it was decided that her existence be kept secret, especially to her pilot.

Once activated, ALICE's character grows as she attempts to rapidly process and analyze the data around her. Initially she reacts by trying to follow the attitudes and opinions of her pilot, then as his logic continues to be irrational and replete with contradiction she is thrown into confusion. By the end of the story she has decided to assert her own will as her own independent person. She feels gratitude, affection and loyalty to the pilots that she was involved with, but does not feel obligated to follow their orders. In her last act she sacrifices her memory, and ultimately existence in order to save the three that were in the combined frame of her MSA-0011 S Gundam.

Created by Dr. Roots and Dr. Carol, ALICE was a system developed in order to create a system to automate the functions of a mobile suit. The primary goal was to integrate "her" into a Gundam and allow her to monitor and manage the combat situation and functions as well as the vital signs of her pilot. By the input and stimulus of the pilot and combat situation she was meant to grow and learn, becoming more effective than the pilot himself, though still an integral part of a larger system. The ultimately once she had learned enough she would be able to function autonomously in mobile suits far more agile than those with pilots are capable of.

As the development proceeded Ms. Roots treated her more and more as her child, though the system was not "alive" at this time. Tensions between parties over ALICE's development grew and an explosion occurred within the lab at which ALICE was being developed. Dr. Roots gave her life using her body to shield the system from the explosion, which was suspected to be an act of sabotage. The project was tabled.

Some time thereafter it was picked up again as a group of soldiers were selected as potential candidates to be linked to ALICE, in keeping with the Carolian theme these candidates were designated "Cheshire Cats". During the two years that followed the recruitment of the Cheshire Cats and the revolt at Pezun, the project was picked up and then dropped, leading to a partial completion and integration of ALICE into the S Gundam. Deeming the revolt at Pezun of little overall importance or threat the Earth Federation saw it as a perfect opportunity to test ALICE in a combat scenario and the hot-headed pilot Ryou Roots was selected as its pilot without being informed that the system existed... or that it could override his commands and take direct control of the Gundam. The only two people aware of ALICE's existence in Task Force Alpha were it's commander, Eton Heathrow and his advisor Stole Mannings, however even they were not made clearly aware that the system was active within the S Gundam, both of them assuming that she had been sealed.

ALICE first made her presence known when Roots clashed with New Desides officer during Task Force Alpha's assault on Pezun. Roots chose to charge Josh Offshore and ALICE reacted by setting off an alarm in Roots's cockpit and silently screaming a string of negative emotions:

After he disengages she lapses into silence once again with the flow of her own thoughts. During Operation Eagle Fall, Chung Yung falls prey to the Logistic Bomb and he falls to a situation of helplessness before oncoming foes. Roots flys out to assist him cursing at the situation. ALICE follows this and curses as well she begins trying to understand the relationship of comrades and self-sacrifice, perplexed by Roots risking danger to save Yung. Not long thereafter Yung and Roots banter while in flight and ALICE observes their conversation. They remark on each other's peculiarity and attempting to grasp this ALICE begins to use their statements as generalizations and indicators as a blanket for all of humanity.

After the deaths of John Grissom and Robert Aldrin at the hands of Brave Cod, ALICE finds she cannot comprehend Roots's grief. She begins to try to put things together and come up with a logical conclusion. She decides that friends are the most important thing, that Roots is her friend and that one must take vengeance for lost friends, however she is uncertain if one should do so if it involves hurting others.

Following Sigman Shade's Ζeta Plus being shot down ALICE decides that her course of action must be to take revenge (though Shade did in fact survive). She feels that the act of sacrificing oneself in order to kill ones enemy is meaningless. Here ALICE engages in a dramatic battle with Cod. He throws out one of his Incoms to attack and ALICE blocks it by interposing the S Gundam's beam rifle in its path, losing the rifle in the process. As they fight she mulls over whether Cod or Roots is in the right, she concludes the response that she requires to understand is to be thrown into a battle madness, however she also realizes that this would require her to intentionally malfunction and be counter-productive. ALICE ejects the hip guns of the Ex-S Gundam, kicks Cod's ORX-013 Gundam Mk-V into the moon's surface, landing as well and draws a beam saber to defend against the charging Cod. Roots panics with his Gundam acting on its own and with Cod charging at him with a beam saber, however ALICE remains calm and kills him with a clean thrust of her beam saber.

Seeing the S Gundam perform at a level far greater than that of Roots's skill, Mannings begins to suspect that ALICE may have gone live. In a second duel with Roots he attempts the same maneuvers as Cray had in order to throw Roots off balance and attempt to cause ALICE to show herself. ALICE questions this, but vows not to be afraid. She takes control of the Gundam as Roots desperately pretends to be piloting it and defeats Mannings and his MSA-007T Nero Trainer.

ALICE is again silent for some time, until the final battle against the Zoans at Penta. After the S Gundam's three components have combined to form it she takes control of the machine, shocking all three of its other occupants. It is then that ALICE realizes that her will is her own and that she does not need to be motivated or controlled by the wills of her pilots, that a machine must obey, but that she is not a machine, she is instead herself.

ALICE casually evades all the attacks thrown at her by Offshore, pitying the ineffectualness of his attacks. She realizes that she has human dreams, but that as an AI, she cannot accomplish them. She engages Tosh Cray's Zoan, easily cutting off a wire hand that it was attempting to use as an all-range attack. She then enters a melee clash with him for a moment, then he withdraws. Offshore's RMS-142 Xeku Zwei attacks her, slashing the S Gundam's shoulder, she quickly reacts, turning things around and kicking his cockpit repeatedly then tosses it towards the Earth. As Cray attempts to catch up to the Enterprise Transport Shuttles ALICE opens fire on him, hitting his Zoan several times, causing it to break apart and the large missile in it to detonate and destroy it along with Cray.

ALICE briefly contemplates her options, realizing that in order to destroy the last shuttle, but save the three inside of her, she must separate them into the re-entry capable core fighter and must herself pursue it with the rest of the S Gundam, an act that will fry the circuits of her AI and likely incinerate the Gundam, either way functionally killing her. She realizes that she will lose all the memories she gained with Ryou Roots, but accepts this. She thanks him for the memories, then ejects their core fighter towards the Earth. She recombines the top and bottom of the Gundam and raises her beam rifle up to fire a final shot to destroy the shuttle. Her existence ends thus: 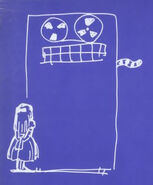