The instruction manual of the Gerbera Tetra model displayed the following plot to depict how the unit came to be. As part of its military reconstruction following the One Year War, the Earth Federation Forces began its Gundam Development Project, the goal was to produce new Gundam-series mobile suit prototypes to test new technology and concepts. The intended fourth unit in this GP series was the RX-78GP04G Gundam "Gerbera". It was designed around the Principality of Zeon's tactic of performing high speed assault with Mobile Suits, which proved successful against the Federation in the One Year War, as the Federation forces had little to no time to respond to the attack. The Federation recognized this as a superior tactic, and sought to produce Mobile Suits to do the same in return.

However, the "Gerbera" never saw the light of day as its goal conflicted with its brother unit, the RX-78GP01 Gundam "Zephyranthes" which was upgrade-able for space combat, so it made no sense financially or tactically to produce two Mobile Suits to do the similar task. In the end, the "Zephyranthes" and its modular system was chosen over the "Gerbera" and its general purpose design, and Anaheim Electronics was left with a half-completed prototype of the RX-78GP04G. The division within Anaheim Electronics that produced the "Gebera" was created from the Zeonic Company (which still had strong loyalty to Zeon) and was approached by the Delaz Fleet. By request, the division revised the design of the "Gerbera", and produced the AGX-04 Gerbera Tetra.

A prototype beam weapon that continuously fires pulse shaped beams and excels in sweeping fire and assault use, causing widespread destruction by multiple shots. As the technology for intermittently firing mega particles is under development, a cooling jacket and a coolant tank is connected to the barrel and the lower part of the barrel respectively. A forced cooling nozzle is also located at the back of the main mechanism section. When the gun has reached its operating limit, the top part of the main mechanism section slides out for forced cooling and a limiter is also activated, disabling the rapid-fire mode. Reactivation of the mode requires a new coolant tank.

In UC 0083, the Delaz Fleet launched Operation Stardust, an uprising against the Federation. Anaheim Electronics, while supporting the Federation, also offered to support Aiguille Delaz. Vice-President O'Sullivan then gave the completed Gerbera Tetra to Lieutenant Colonel Cima Garahau as a political gesture.

Some say that branch of the Earth Federation, which later developed into Titans, cancelled the development in order to provide this mobile suit to the spy Cima Garahau in secret. Although highly possible, no actual record could be traced to support this argument. During the last stages of Operation Stardust, Cima was killed and the Gerbera Tetra destroyed by Federation pilot Kou Uraki, piloting the RX-78GP03D Gundam "Dendrobium Orchis", when Kou impaled the Tetra on the end of its beam cannon and blasted the suit in half. 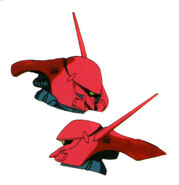 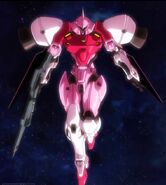 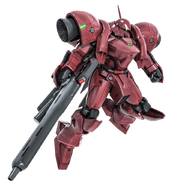 Retrieved from "https://gundam.fandom.com/wiki/AGX-04_Gerbera_Tetra?oldid=454710"
Community content is available under CC-BY-SA unless otherwise noted.