The beam machine gun operates on similar principles as a beam rifle, but it breaks down the concentrated mega particles so that it fired a burst of smaller less powerful beams instead of a single large coherent beam. Each individual beam in a burst was less powerful than the coherent beam from most other beam rifles, however because of the immense power in standard beams this was an issue of little importance. The burst did allow for a spread of beams, similar to a beam spray gun, allowing for a greater chance of hitting a target, yet holds the same range as a regular beam rifle. Because the beam machine gun will overheat from constant use, it was equipped with an automatic cooling mechanism. 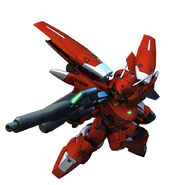 Retrieved from "https://gundam.fandom.com/wiki/AGX-04A1_Gerbera_Tetra_Kai?oldid=420669"
Community content is available under CC-BY-SA unless otherwise noted.