Energy can be focused on each hand of the Alus Core Gundam to generate a massive Beam Blade. This blade is directly powered by the Gundam's generator and its output greatly exceeds that of the Earthree Gundam's Beam Sabers.

The standard ranged armament of the Alus Core Gundam. Like the one used by the Core Gundam, it can be upgraded into other forms by attaching additional parts.

A versatile armor set used by Hiroto's Core Gundam and Core Gundam II. During Alus' invasion of the GBN, he managed to hijack this armor set from Hiroto and used it with an Alus Core Gundam that has an altered head design.

Head close up after docking with Hiroto's Earth Armor (Ep 26) 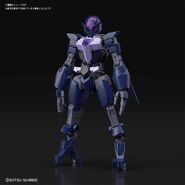