Following the completion of the AGP-X1/E3 Alus Earthree Gundam, Alus continued to analyze Hiroto's PLANETS System and GBN's Gunpla Battle data. Alus' analysis of GBN data focused on the comprehensive strength of the RX-93 ν Gundam, resulting in the new "ν Gundam's armor" that can dock with the AGP-X1 Alus Core Gundam to form the Fake ν Gundam. This new armor is also theoretically compatible with Hiroto's PFF-X7II Core Gundam II as the armors created by Alus are based on the PLANETS System.

Since the Fake ν Gundam is mainly based on the characteristics of the ν Gundam, it is similarly equipped with remote-controlled Fin Funnels that enable omnidirectional attacks and its main body is capable of extremely high-spec performance. Like the Alus Core Gundam and Alus Earthree Gundam, the sensor on the Fake ν Gundam's head glows red when it is controlled directly by Alus. This glow is not present when the machine is operated by the Guard Eye.

Based on the ν Gundam's iconic large all-range weapons, these six remote-controlled weaponry have open-type Mega Particle accelerating zones and small generators, allowing them to fire powerful beams. Multiple Fin Funnels can be used to generate a Beam Barrier.

An upgraded form of the Alus Core Gundam's Core Spray Gun with additional parts. Its beams can be compressed and fired intermittently, and it can also be used as a rapid-firing machine gun. 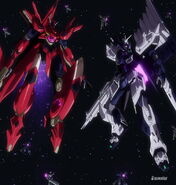 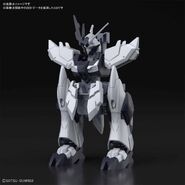 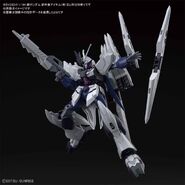