Like the Alus Core Gundam, the Alus Earthree Gundam can focus energy on each hand to generate a massive Beam Blade. This blade is directly powered by the Gundam's generator and its output greatly exceeds that of the Earthree Gundam's Beam Sabers.

An upgraded form of the Alus Core Gundam's Core Spray Gun with additional parts. The arm cover attached to the left side of the Beam Rifle can be opened and connected to the left arm to be supplied with additional energy directly from the Gundam itself. This enables high-precision sniping with powerful blasts, also known as "Burst Shooting", similar to what the Earthree Gundam is capable of. The Beam Rifle can also fire scattered beams for attacking multiple targets. 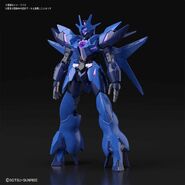 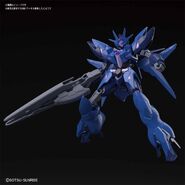